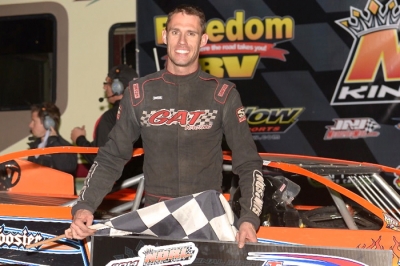 Whitwell started from the pole of the 30-lap race, and outdueled second-starting Chase Junghans in an early side-by-side battle before later pulling away from Billy Moyer through the event’s closing laps. Whitwell held nearly a straightaway advantage at the finish of the caution-free race to earn a $3,000 victory in the first round of Tucson’s six-race miniseries.

Whitwell’s breakthrough victory is his third in three starts since teaming up with Jeff Manka of Phoenix, Ariz., late last season to drive his No. 5 Rocket Chassis.

“I’ve been coming to this race for a few years now and to finally get a win really means a lot, especially being the first night,” said Whitwell, who attended Tucson’s Wild West Shootout for many years before the track launched its current Winter Extreme miniseries last season. “This car’s pretty new to me. I’ve only driven it three times, but we’ve actually won all three races so far.”

Moyer of Batesville, Ark., settled for second after advancing from the fifth starting spot while Will Vaught of Crane, Mo., drove from 13th to third. Jimmy Mars of Menomonie, Wis., and Shane Clanton of Zebulon, Ga., rounded out the top five in the non-points event for the National Dirt Racing League. Junghans of Manhattan, Kan., slid back to eighth at the finish after leading the race’s opening lap.

Starting from the pole, Whitwell got the jump on Junghans on the race’s initial start before slight bobble in the first turn allowed Junghans to grab the lead exiting turn two. But Whitwell quickly settled into a fast groove around the bottom of the 3/8-mile track and edged ahead of Junghans to lead lap two. The two drivers ran side by side over the next few laps with Whitwell narrowly leading each lap before finally pulling ahead for good on lap five.

Whitwell cruised through the race’s middle portions before lapped traffic came into play just as the veteran Moyer took control of second. Moyer closed to within a few car lengths of Whitwell as he struggled to overtake slower cars, but Whitwell finally cleared the worst of the traffic just before the lap-20 mark and pulled away in the closing laps.

“I didn’t wanna just cruise around the bottom,” Whitwell said. “I figured someone might go through the middle and pass me. But once I got up there in the middle and got on the outside of a lapped car for a while … I realized it’s probably not a good idea not to get back out there again. Luckily, I was able to get ahead of that guy and get clear and a couple lapped cars moved out of the way.”

(Top six in each group invert for heat race lineups)