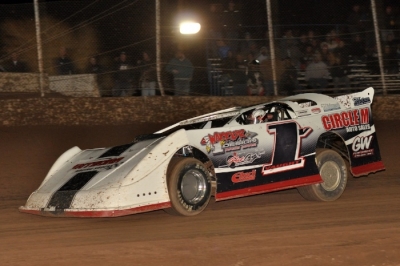 Will Vaught heads to victory at Tucson. (photosbyshana.net)

TUCSON, Ariz. (Jan. 16) — Fourth-starting Will Vaught of Crane, Mo., overtook struggling polesitter Jimmy Mars of Menomonie, Wis., on the 28th lap Wednesday at Tucson International Raceway to capture the third round of the six-race Winter Extreme.

Mars built more than a straightaway lead at the lap-20 mark of the 30-lapper, but his car’s handling was hampered as he approached lapped traffic in the final laps. | Complete Arizona coverage

Vaught’s blazing No. 1 swallowed huge swaths of ground and he was all over Mars’s ill-handling car by lap 26. When Mars pushed high exiting turn four with just over two laps remaining, Vaught pounced, hanging his car sideways before zipping under Mars and taking command.

“I had watched him when I was catching him, and he was shoving in the center — he said it ended up his right-front strap was getting into the tire and making it shove — and we he shoved, I bent the car and gassed on it, and the hole opened up," Vaught said. "It was meant to be. The lapped cars really hurt him. ...

“Saturday night, we lost that thing leading it with two or three to go, and tonight we passed him with two to go and the good Lord was on our side and we came out on top.”

Mars held on to second — his third top-three finish this week at Tucson — while eight-starting Shane Clanton of Fayetteville, Ga., was also in the mix finishing third. Terry Phillips of Springfield, Mo., and Justin Kay of Wheatland, Mo., rounded out the top five.

Billy Moyer of Batesville, Ark., started third and ran second the first 10 laps, but he slipped high in turn two on the race’s lone restart following a caution for Kyle Beard and never recovered.

Problems on the right front of Mars's car caused a “skidding the right front tire" that made it car a handful late in the race. “I would’ve like to have won, but I’ll take the second and congratulations to Will," he said.

Notes: Vaught drives a Clements-powered Warrior Race Car sponsored by Circle M Auto Sales, GW Performance and Integra Racing Shocks. ... Vaught notched his first career victory in Arizona. ... He led a few laps late in Saturday's opener before finishing second to Tim Fuller. ... Ten drivers finished on the lead lap and 12 of 24 starters were running at the finish. ... Jesse Stovall, piloting Jeff Manka’s home-state No. 5m after breaking a motor in the Al Humphrey-owned No. 00, started the feature in the backup car of fellow Missouri driver Terry Phillips, taking just a few laps and pulling in. ... Other park-and-start cars were Bumper Jones, Morgan Bagley, John Lowrey, Chris Simpson and R.C. Whitwell. ... In the fifth heat race, Rick Shafer and Steve Isenberg got tangled up on the backstretch with both cars suffering heavy damage; neither driver was injured. ... Steve Drake was running second in the first consolation when he stalled in turn four. ... Rodney Sanders of Happy Texas, entered in the No. 7k Late Model owned by fellow modified driver Jason Krohn, but he never hit the racetrack. ... Sanders did compete in the modified division, however, staying a perfect 3-for-3 in features halfway through the miniseries.