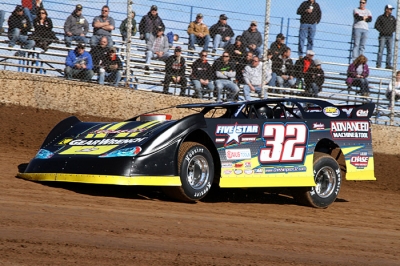 Chris Simpson matched his career high with a $5,000 victory in Tucson, Ariz. (mikerueferphotos.photoreflect.com)

Making just his second start in his new MB Customs car, Simpson was never seriously threatened by Jimmy Mars — co-designer of the chassis — in scoring a $5,000 victory to match the richest payday of his career. | Complete Arizona coverage

“It feels good to come out here and get a win right away,” said Simpson, who finished fourth in Saturday’s miniseries opener. "I never would’ve thought ... last night we were close, and tonight we’re there, so it feels real good.”

In a race where a rubber strip filtered racing into single file by the midway point, Simpson was never seriously threatened, building a full straightaway lead after 25 laps and never allowing Mars to get closer than a half-dozen car lengths in the late stages of the caution-free affair.

“I made sure I came up down on the straightaways, because that’s where most guys get you,” said Simpson, who received help in the pits from fellow Iowan Brian Birkhofer, a two-time World 100 winner and another co-designer of the MB Customs car. “They kind of roll in on you and get more miles per hour down the straightaway, then roll in the middle ... Brian was telling me I had a good lead, so I just kept it straight, kept smooth on the throttle to keep the right-rear (tire) on it, and it all worked out.”

Mars, who started third, had hopes of tracking down Simpson in his own MB Customs machine, but the timing didn’t work out.

“He went high a couple of times there in lapped traffic, and I’m like ‘Maybe you could do that one more time for me please,’ ” Mars jokingly said. "Nah, he did a good job judging where he needed to be. Congratulations to them guys.”

Morgan Bagley of Longview, Texas, was third followed by Shane Clanton of Fayetteville, Ga., and hometown driver R.C. Whitwell, who posted his second straight fifth-place finish at the 3/8-mile oval.

Don Shaw of Ham Lake, Minn., started outside the front row but dropped back quickly and pulled to the infield on the third lap.