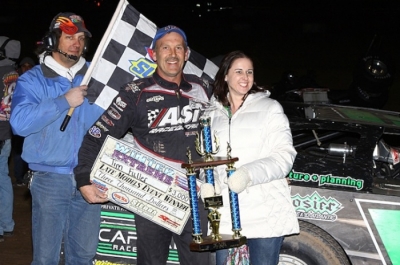 TUCSON, Ariz. (Jan. 12) — Taking advantage as two leaders fell by the wayside, Tim Fuller of Watertown, N.Y., captured the first round of Tucson International Raceway’s six-race Winter Extreme for his second victory of 2013.

Vaught, of Crane, Mo., settled for second ahead of Jimmy Mars of Menomonie, Wis., who appeared to be on his way to victory when he lost the lead getting too high entering turn one on a lap-26 restart. That restart came moments after polesitter and race-long leader Brad Looney of Republic, Mo., went spinning into turn one after Mars bumped him from behind at the flagstand as they battled for the lead.

Looney, sent to the tail by race officials, was among nine drivers who dropped out while Chris Simpson of Oxford, Iowa, and hometown driver R.C. Whitwell rounded out the top five finishers. Fuller’s Kennedy Motorsports teammate Shane Clanton of Fayetteville, Ga., made a late rally after starting 20th to finish sixth.

Besides the lap-25 caution for Looney, three other yellows slowed the action. Billy Moyer of Batesville, Ark. — a six-time winner at Tucson over the past two seasons — slowed on the backstretch on the sixth lap with engine problems and John Lowrey slowed in turn four on the ninth lap. Clay Daly brought out a lap-21 yellow when his No. 32B’s right-side tires briefly climbed the turn-four wall before returning to the track.

Notes: Fuller’s Capital Race Car is sponsored by Core Construction, Kennedy Partners Racing, Keyser Mfg., and Ironco. ... Fifteen cars were running at the finish, 13 on the lead lap. ... John Anderson of Omaha, Neb., started outside the front row and was running second when he slowed and dropped to the infield near the midway point of the 30-lapper. ... Chris Simpson held second in key parts of the race but lost ground when he twice slipped over the turn-four cushion. ... Steve Drake broke a right-front lower control arm, forcing him out of the race at Moyer's lap-six caution. ... Mod ace Jason Krohn of Slayton, Minn., made his Late Model debut, finishing 16th. ... Rodney Sanders of Happy, Texas, won the modified feature, dominating most of the way before Blake Jegtvig made a late charge to get within a few lengths at the finish.