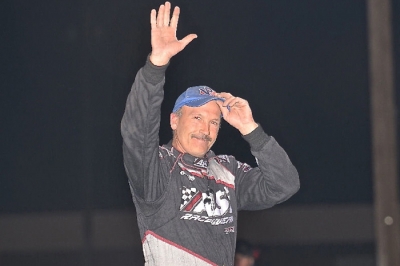 CASA GRANDE, Ariz. (Jan. 5) — Fourth-starting Tim Fuller of Watertown, N.Y., took the lead on lap four of Saturday’s Wild West Shootout feature and controlled the remainder of the 30-lap race to claim a $3,000 victory during the first night of a doubleheader weekend at the recently reopened Central Arizona Raceway. | Arizona coverage index

Fuller advanced quickly after a lap-two restart and easily wrestled the lead from outside polesitter Billy Moyer Jr. of Batesville, Ark., two laps later. He maintained a slight advantage over third-starting Justin Kay of Wheatland, Iowa, throughout the majority of the race and survived a restart with five laps remaining to win in his first-ever start in Arizona.

Kay settled for a solid runner-up finish ahead of sixth-starting R.C. Whitwell, who was the highest finishing home-state driver in third. Shane Clanton of Fayetteville, Ga., made a strong charge from fifth on the final restart, nearly taking over second before falling back to fourth at the finish. Open-wheel modified standout Rodney Sanders of Happy, Texas, finished fifth in his first Late Model start.

Polesitter Pat Doar of New Richmond, Wis., got shuffled back to fourth on the race’s opening lap and ended up sixth. Moyer Jr. faded to ninth, finishing one spot behind his father Billy Moyer, who started 22nd after getting caught in a heat race incident.

The Wild West Shootout returns to Central Arizona for the first time since 2008. The event began at Central Arizona, but moved to nearby Tucson (Ariz.) International Raceway after Central Arizona closed during the middle of the 2008 season. It was successfully held at Tucson from 2010-2012, drawing as many as 70 Late Models before promoter Benji Lyons moved the event back to Central Arizona this season. … Tucson has planned its own January events with the six-race Winter Extreme scheduled for Jan. 12-20. … After missing Friday’s practice due to travel issues, Shane Clanton of Fayetteville, Ga., is in the pit area today plans to compete. He joins Kennedy Motorsports teammate Tim Fuller of Watertown, N.Y., who is competing in Arizona for the first time. … Pat Doar of New Richmond, Wis., is debuting a new Capital Race Car this weekend, joining Clanton and Fuller as the only Capital cars entered in the event. … Garrett Alberson of Las Cruces, N.M. is racing an older MasterSbilt Race Car this weekend that his team recently purchased. He plans to use his MasterSbilt from last season next week at Tucson. … Nick Bartels of El Segundo, Calif., is debuting a WFO Chassis this weekend. … Racing action is scheduled to get under way at 4 p.m. A pill draw will determine Late Model heat race lineups which will use passing points to determine feature transfers and lineup. IMCA Modifieds, super stocks, pure stocks and dwarf cars are also in action.