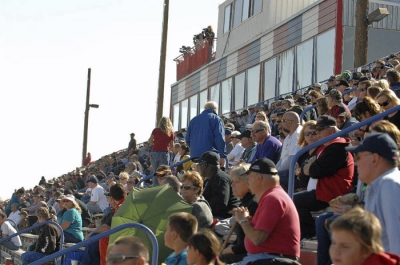 Schedules have been shuffled and sanctioning has come and gone, but Arizona remains set for its busiest January for Dirt Late Model racing in recent memory.

Eight unsanctioned winter races are on tap with Jan. 5-6 events for the Wild West Shootout at Central Arizona Raceway in Casa Grande, Ariz., and Jan. 12-13, 16 and 18-20 races for the Winter Extreme at Tucson International Raceway. | January 2013 schedule

The schedule change is “the right thing for the fans, the racers, and for Central Arizona Raceway,” Lyons said in a track press release.

Both Late Model events at Casa Grande, a track that reopened for a modified special in November for the first time since 2008, will pay $3,000-to-win.

Tucson, promoted by owner Pat Robley and Jamie Throckmorton, has held fast with a six-race schedule over nine days with afternoon programs for the Saturday-Sunday shows and evening programs for the Wednesday and Friday events.

It was initially announced that Winter Extreme action would be sanctioned by the World Racing Group’s DIRTcar division, but the track resisted organizational rule changes that would've added tires not normally allowed at Arizona’s winter events.

Notes: All eight events will be available via pay-per-view at DirtonDirt.com. Details and pricing will be announced soon. ... The Wild West Shootout, which was held at Tucson last January, drew more than 70 race teams in 2012 with Billy Moyer, Tim McCreadie, Don O’Neal and Morgan Bagley winning races (Moyer won three for the second straight year). ... The previous busiest January in Arizona was in 2006 when Tucson hosted two races and Central Arizona hosted five races. ... Modifieds will compete in every program at Central Arizona and Tucson with other local divisions running a mixture of events. ... Tucson driver R.C. Whitwell is expected to lead the home-state contingent. He was a $6,500 winner of Thanksgiving weekend’s Carl Trimmer Classic at TIR.