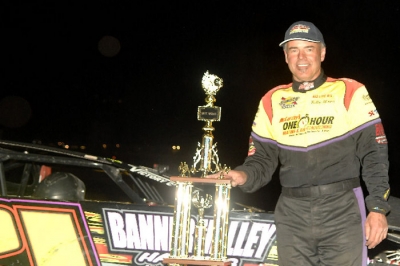 TUCSON, Ariz. (Jan. 21) — Good things come in threes for Billy Moyer at USA Raceway. The 54-year-old Hall of Fame driver from Batesville, Ark., led the final 13 laps in Saturday's fifth round of the Wild West Shootout, earning his third victory of the week and becoming the winningest driver all-time on the 11-year-old Arizona miniseries. | Complete WWS coverage

Moyer earned three victories at the 3/8-mile oval for the third straight January as he rallied from his 10th starting spot for a $3,000 victory in a 30-lap main event. He rolled around Jeff Provinzino of Hibbing, Minn., on the 18th lap and never looked back.

"On the first lap there, we made a good move there through the center when Tim (McCreadie) tried to go high and that other guy did, too. The sea parted there and I shot through there and that probably won the race for us, just getting through there right off the bat like that," said Moyer, who was up to third after just seven laps. "The car's just phenomenal. ... I could drive kind of in the middle of the track where it seemed like a lot of 'em had trouble running."

The polesitting Provinzino settled for second after leading laps 13-17 while Jon Kirby of Russellville, Ark., was third as both drivers posted their first top-five finishes in miniseries history. Terry Phillips of Springfield, Mo. — who entered the week as the winningest miniseries drivers with nine victories — finished fourth and Don Shaw of Ham Lake, Minn., rounded out the top five in the caution-free event.

John Lowrey of Bakersfield, Calif., started outside the front row and led the first 12 laps, building a lead of a half-straightaway by the time Moyer got to third. But a faulty distributor cut his car's power and he coasted to the infield, giving up the lead to Provinzino, who briefly checked up and suddenly had his hands full with Moyer.

Provinzino stretched out a few lengths on Moyer for a few laps, but Moyer swung around the leader on the frontstretch and drove around him in turn one to take the lead with 13 laps remaining.

"I think that guy there kind of got to guarding the bottom a little bit too much, and I was working him on the bottom and I could see that wasn't going to work, so I had to go to the next alternative and try to run the middle," Moyer said. "I just kind of started moving my lines around and everything came together there, and I was just able to get him. The car, it was on the money."

The Wild West Shootout wraps up Sunday with the $10,000-to-win Bill Cheesbourg Memorial for the Super Late Models, the late Tucson native who made six starts in the Indianapolis 500.

Race notes: Moyer's Victory Circle Chassis has a Clements Racing Engine and sponsorship from L&D Trucking, Banner Valley Hauling, Red Line Oil, and New Vision Graphics. ... Moyer has nine Wild West Shootout victories in Tucson and one at Central Arizona Raceway in Casa Grande. ... The 30-lap feature wrapped up a long afternoon and evening in Tucson for a four-division program that pounded the track's racing surface. The one-grooved track was reworked before dusk, allowing a wider racing groove for the final events. ... Ricky Thornton Jr. got upside down after contact with Dane Dacus in the seventh heat while they battled for the lead in turn three; no injuries were reported. ... Thornton was driving teammate Joey Moriarty's No. 51. ... Will Vaught crossed the finish line first in the fourth heat, but was penalized two spots for jumping a start, costing him a starting spot in the main event. ... Eighty-one Late Model drivers have entered at least one WWS event. ... Stormy Scott of Las Cruces, N.M., won the afternoon's modified feature, a caution-free event that marked his third victory of the miniseries.