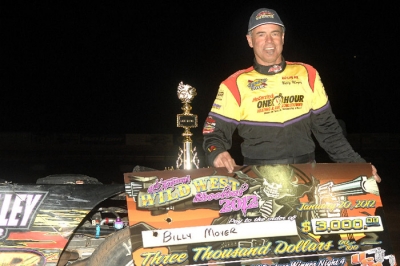 Billy Moyer led all 30 laps of the caution-free feature. (photofinishphotos.com)

TUCSON, Ariz. (Jan. 20) — Just when it looked like Tim McCreadie was gearing up to overtake fellow front-row starter Billy Moyer on Friday night at USA Raceway, the Hall of Fame driver slipped away for yet another victory at the Wild West Shootout.

The 54-year-old Batesville, Ark., driver cruised the final 10 laps at the 3/8-mile oval for a $3,000 payday in the fourth round of the Arizona miniseries. Moyer's second victory of the week was the ninth of his career, tying him with Terry Phillips of Springfield, Ill., atop the all-time victories list in the desert. | Complete WWS coverage

McCreadie, the Watertown, N.Y., driver who won Sunday's feature, settled for a second-place finish in the caution-free 30-lapper while fellow Warrior Race Cars driver Will Vaught of Crane, Mo., gained four spots to finish third. Brad Looney of Republic, Mo., was fourth and Shannon Babb of Moweaqua, Ill., rallied from his 15th starting spot to round out the top five.

Moyer's No. 21 jumped into the early lead and, with McCreadie stalking him, the frontrunners edged away from the 24-car field. But as the leaders approached lapped traffic, things tightened up among the top five and McCreadie took a few cracks at Moyer, running nearly side-by-side when they picked different grooves past Jason Papich and then again down the frontstretch on the 18th lap.

But Moyer was able to get a cushion of one lapped car and then two while McCreadie couldn't muster a challenge over the final 10 laps.

"I knew he'd be right there on me, and I just couldn't stub my toe any there on the lapped cars," said Moyer, who captured Saturday's opener and became 2012's first repeat winner in Arizona. "I just tried to get through (the lapped cars) as smooth and as quick as I could without scrubbing off too much speed. When it's that slick like that, if you let the tires get out from underneath you for just a minute, the guy behind you can make up a lot of ground."

McCreadie, who came to Arizona to get up to speed in his new Warrior, once had to get off the gas for a lapped car diving to the infield and another time got sideways between turns three and four to lose momentum.

"Billy's one of them guys, he's probably the best guy ever to drive one of these cars," McCreadie said. "If you show him a nose, and unfortunately he's too smart. You've got like one shot at a guy like that. I got in there and didn't make it happen, and at the time he might've been thinking 'I'm pretty smooth and I'm clear,' but once I showed him where I was, he found a little more."

Vaught, along with Looney and Jimmy Mars, was hot on the heels of Moyer and McCreadie at the race's midpoint but couldn't maintain the pace.

"The car's great. I got it working on the top of (turns) three and four and the bottom over here ... if we wouldn't have gotten jumbled up at the first of the race, I think we might've had something for 'em. But we got pushed back and about spun out once. We're getting better," Vaught said. "If we could just get this No. 21 to have a flat or something, we'll be OK."

Race notes: Moyer's Victory Circle Chassis has a Clements Racing Engine and sponsorship from L&D Trucking, Henderson Motorsports, Banner Valley Hauling and New Vision Graphics. ... Wednesday's winner Don O'Neal crossed the line first in the second heat race, but he was disqualified for failing to go to the scales; he didn't compete in his consolation race. ... Ricky Weiss spun in the second consy while battling with Jason Papich for a transfer spot. ... Stormy Scott won the night's modified feature. ... The fifth round of the six-race series is scheduled for 1 p.m. Saturday with another $3,000-to-win Late Model feature and $1,000-to-win modified feature. ... Late Model action wraps up Sunday with the $10,000-to-win Bill Cheesbourg Memorial.