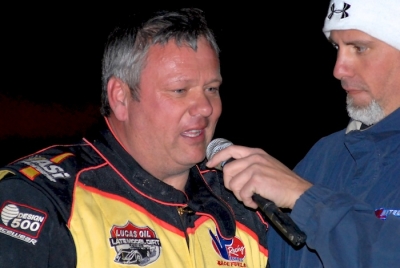 TUCSON, Ariz. (Jan. 18) — Polesitter Don O'Neal fought off late challenges by from Billy Moyer in the final laps Wednesday night at USA Raceway to capture the third round of the sixth annual Wild West Shootout.

Moyer, of Batesville, Ark., tried to slide under the high-running O'Neal on three occasions late in the 30-lap feature, but the Martinsville, Ind., driver stayed out front for his first-ever triumph in Tucson. | Complete WWS coverage

"I got to letting off a little getting into (turn) one down here," O'Neal said in victory lane. "Then that last lap we ran it wide open. I saw him underneath me there on the white-flag lap. You can't never count that guy out."

O'Neal's victory in the midweek event paid $3,000 as the miniseries reached the halfway point. Action continues Friday night followed by Saturday and Sunday afternoon programs during a week when more than 70 drivers have entered events.

"I had a shot or two there," said the sixth-starting Moyer, an eight-time WWS winner who settled for second. "But I just wasn't quite in position right."

Ronny Lee Hollingsworth of Northport, Ala., rallied from his 14th starting spot to finish third while Clay Daly of Watsonville, Calif., and 23rd-starting Terry Phillips of Springfield., Mo., rounded out the top five.

Shane Clanton of Fayetteville, Ga., led laps 9-12 but smashed the frontstretch wall in a grinding crash after clipping an infield tire barrier, disabling his car's steering. He climbed from his seat uninjured after say in the car a moment, but the heavily damaged car required a pair of tow trucks to be removed from its resting spot just a few feet from the flagstand.

Ninth-starting Jimmy Mars ran as high as second but pulled to the infield with a flat left-rear tire on the 19th lap after contact with Moyer shortly after the lap-15 restart.

The event was slowed by four other cautions, including one during a lap-six restart when bumping between Daly and Moyer up front resulted in a chain-reaction accident in turn four that left Chris Simpson, Jason McBride, Klint Byars and Frank Heckenast as the primary victims. Tim McCreadie avoided the mess by zipping through the infield but had to restart on the tail.

O'Neal's only previous victory in the Arizona miniseries came in 2005 at Central Arizona Raceway in Casa Grande, but he'd come up short in his first two races at Tucson last weekend.

"We needed to be a little bit better changes here to get a little better," the MasterSbilt house car driver said, "because we were struggling a little bit."

Notes: O'Neal's MasterSbilt has a Jay Dickens powerplant and sponsorship from Magnaflow Exhaust and Superior Cleaning Services. ... Previous miniseries winners were Billy Moyer and Tim McCreadie. ... Barely half the 24-car field was running at the finish. ... The Kennedy Motorsports team of Shane Clanton and John Lobb were heading home after a rough week of damaged cars and engines. Clanton's Capital Race Car was virtually destroyed in Wednesday's accident, and the borrowed powerplant he had was also banged up (Clanton broke his lone engine on opening night). ... Will Vaught, runner-up in the miniseries opener, dropped out while leading the first consolation after breaking a fan belt. "Maybe there was a reason I missed it," Vaught said after watching some of the carnage. ... After missing two features, Clay Daly of Bakersfield, Calif., posted a third-place finish and home-state driver Ricky Thornton Jr. was seventh in making his third straight feature. ... Other strong runs by Westerners included a heat race victory for Rob Sanders of Bakersfield, Calif., and a consolation race victory by Garrett Alberson of Las Cruces, N.M. ... Scott Ward of Watertown, S.D., who has competed in the Late Model division, captured the modified feature, the biggest victory of his career.