Pounds weighs in with $3,000 at Bud Nationals 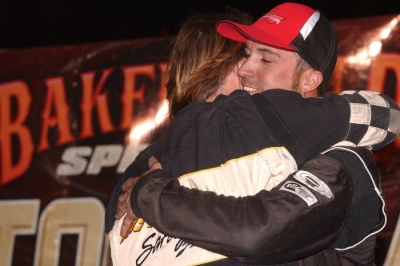 Brad Pounds gets a hug from his father Scott. (K.C. Rooney)

Jason Papich and Sanders started on the front row, but Papich got sideways on the first attempted start, ending his night and putting Lowrey on the pole.

Sanders got the jump on the next start with Lowrey and Mike Kirby giving chase while Pounds battled Andy Obertello for fourth. Obertello dispatched of Pounds and soon took third from Kirby.

Larry Childress spun on the 10th lap the draw the first caution and Kirby began to fade following the restart.

Pounds then broke into the top three, regaining a spot from Obertello while Lowrey was tracking down Sanders up front. Lowrey took command exiting turn two on the 16th lap, and Pounds dropped Sanders to third a few laps later.

With lapped traffic in view, Lowrey spun alone in turn three, handing the lead to Pounds with Sanders taking the second spot from Hogge in the laps following the restart.

Pounds built a straightaway lead before Tommy Malcolm brought out the night's final yellow with three laps remaining. But Pounds wouldn't be denied, staying in control the final laps for the victory.

Notes: Pounds is sponsored by Mid-Cal Fabrication, Richie McGowan, Pounds Racing and Blackjack Power Swivels. ... Pounds previously won on the 3-year-old series on May 23, 2009, at Bakersfield. ... WCS champion Clay Daly held a 13-point lead going into the series points finale and edged Nick Bartels by 10 points at the conclusion. ... Among drivers failing to make the feature: Dino Napier, Chad Reichenbach and Carla Laney. ... The West Coast Shootout concludes the season with a pair of non-points events Nov. 11-12 at Canyon Speedway Park in Peoria, Ariz., paying $1,000- and $2,000-to-win.