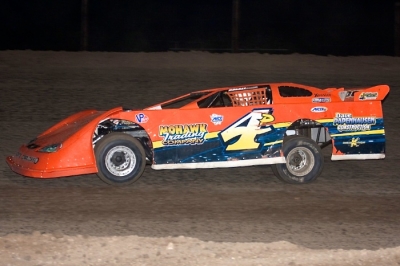 Richard Papenhausen of Chico, Calif., earned $2,500 for his victory at Southern Oregon. (raceimages.net)

MEDFORD, Ore. (Sept. 24) — Using a backup powerplant the team retrieved from California after Friday's preliminaries, Richard Papenhausen of Chico, Calif., raced to a $2,500 victory Saturday at Southern Oregon Speedway in the finale of the Northwest I-5 DIRTcar Late Model Series. | Slideshow

Papenhausen started third in the 22-car field and took the lead from preliminary feature winner Rob Mayea of Bend, Ore., on the 13th lap and led the rest of the way in the 60-lap Battle of the Border main event.

Polesitter Andy Obertello of Hollister, Calif., fell back as far as fourth but made a last-lap pass to get the runner-up spot. Mark Carrell of Redmond, Ore., was the top home-state finisher in third.

Papenhausen's weekend started with a bang Friday as he cruised to a heat race victory by three-quarters of a lap. But his motor broke in Friday's dash, and the team elected to head home to Chico because the backup powerplant was in Petaluma, Calif., seven hours from Medford.

But Saturday morning, the team decided to fetch the backup engine and head back to Medford — a 725-mile journey, 14-hour round-trip journey. Papenhausen arrived at Southern Oregon just in time to compete in a qualifying race that he won, earning a second-row spot in the main event.

Notes: Papenhausen's Rocket Chassis is sponsored by Mohawk Trading Company and Dave Papenhausen Construction. ... Papenhausen's only previous victory on the Oregon-based tour also came at Southern Oregon in the 2009 finale. ... Eleven of 22 starters were running at the finish of the main event. ... Jeremy Shank is the third driver to earn multiple series championships, joining Rob Mayea ('04 and '08) and Trevor Glaser ('05-'07).