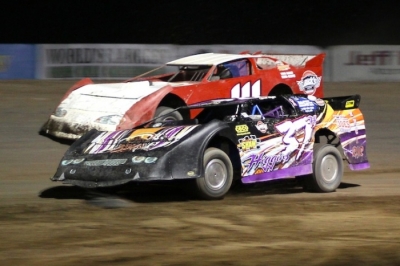 Jones, who slipped back to fourth early in the race, stuck with the high side during a three-way battle for the lead with Terry Belcher Jr. of Buckeye, Ariz., and Scott Lewis of Henderson, Colo., in the closing laps of the 30-lap Championship Late Model Association DIRTcar Series feature. | Slideshow

Driving a Rick Hall-owned car, Jones edged ahead of Lewis on the 28th lap and held on the rest of the way for a $1,200 victory.

"Well, I tried to go to the bottom early and I just didn't have enough power. It just pushed," Jones said in victory lane. "So I thought, 'Well, I set up for the top, I'm going to commit to it.' When I dropped back to fourth, I still felt pretty good because no one impressed me on the top."

Lewis settled for second, but the runner-up performance — along with John Kuchar's lap-six accident — allowed him to capture his first career CLMA championship. Kuchar, also of Henderson, Colo., had a 19-point lead entering the event but Lewis, Friday's CLMA winner at El Paso Speedway Park, came out on top in the season finale.

"Winning the championship was a bonus tonight," Lewis said. "I came into the weekend figuring we were settling for second."

Lewis, who started on the tail of the 20-car field, was up to 10th after just five laps and took the lead from Belcher shortly after a lap-24 restart. But after leading two laps, his low line wasn't fast enough to hold off the charging Jones.

"I just had to go with what I went with to get to the front," Lewis said. "I took the lead and thought I had it on the bottom, but Bumper had a little more momentum on the top."

Belcher, who led more than 20 laps, settled for third at the finish while hometown driver Garrett Higgins recovered from lap-20 spin — while he was running second — to come from the back to finish fourth. Greg Jelvik of Tucson, Ariz., rounded out the top five.

"The tires just kind of went away on us," said Belcher, whose father won at the 40-year-old track when it was called Mesilla Valley Raceway.

Higgins, who fell out of the previous night's event in El Paso with engine problems while running second, was glad to salvage a top-five finish.

"I was pretty bummed. We'd been running pretty tough with these CLMA guys and gave a couple away. ... I just overshot that cushion," Higgins said. "I thought my night was over, but sometimes it's not over until the fat boy sings."

The race was slowed six times, the most serious for Kuchar's lap-six accident when he got into the wall. At the same time, Manny Nunez slammed into the rear of Cliff Hansen's car, and Dan Shepherd was also involved. All but Shepherd were done for the night. No one was seriously hurt, but Hansen held his right wrist after climbing out of his car.

Garrett Alberson ran among the leaders early before dropping off the track and out of contention early. Alan Bowers retired with steering problems after the early red flag.