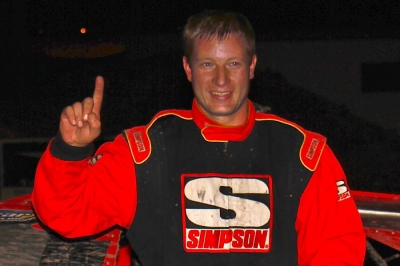 Lewis earned his third career CLMA victory and his first since the 2009 season finale at I-76 Speedway in Fort Morgan, Colo. | Slideshow

Paul Banghart of Tucson, Ariz., briefly grabbed the lead from Lewis on the seventh lap, but he was knocked from contention two laps later when his No. 24 climbed the left-rear wheel of Dan Shepherd's slower car.

"The track was a little rough down there in (turn) four coming out, but we managed to run right through it and get the win," said Lewis, who fought a tight-handling car early in the race. "After Paul got by me and we were both messing around with those lapped cars, my car wouldn't turn the way I needed to, so I just reached up and turned three-wheel brakes on. ... it started going a lot better for me."

Kuchar, who was up to third by the ninth lap, couldn't keep up with Lewis but maintained his series points lead. He previously won CLMA championships in 2001 and 2006.

"I'm too old for this, but I had a blast," said the 57-year-old Kuchar, who didn't began racing until his 40s. "It's the most fun racing I've had in years and these guys did an awesome job out there."

Besides Banghart, other contenders who fell by the wayside were Terry Belcher Jr., part of the same multicar accident along with Alberson, and Garrett Higgins, who was running second when his car went up in smoke on the 22nd lap.