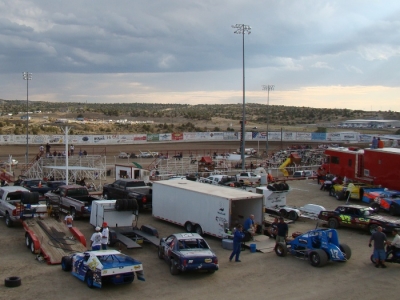 AZTEC, N.M. (Sept. 4) — Kelly Boen of Henderson, Colo., completed his weekend sweep at Aztec Speedway on Sunday, inheriting the lead late in the race and blowing an engine at the checkers for a $2,500 victory on the Championship Late Model Association DIRTcar Series. | Slideshow

Boen, who earned $1,500 in dominating Saturday's opener, got the lead with six laps remaining when hometown driver and fellow heat winner Garrett Higgins spun out while checking up for a slower car. Boen led the rest of the way, just making it to the finish before engine problems struck.

Arizona drivers Terry Belcher Jr. and Paul Banghart finished second and third in the 21-car field while John Kuchar of Henderson, Colo., was fourth. Garrett Alberson of Las Cruces, N.M., rounded out the top five as the top home-state driver and Higgins settled for 16th.