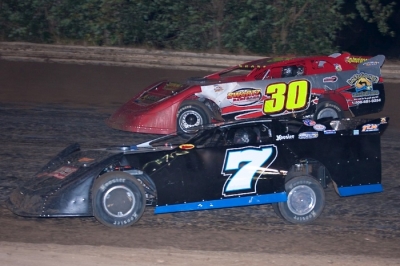 LEBANON, Ore. (July 2-3) — Mike Johnson of Lompoc, Calif., made his holiday weekend trip to Oregon worthwhile with a $5,000 victory in the Clair Arnold Memorial.

Johnson, who spun on the first lap and rallied from the tail the remaining 80 laps, notched his first career victory on the Northwest I-5 Tour DIRTcar Late Model Series. | Slideshow

Johnson took the checkers ahead of his temporary car owner, Rob Mayea of Bend, Ore., who invited Johnson to drive his backup Victory Circle Chassis at two series events.

Billy Workman Jr. of Canby, Ore., driving his late father's Late Model, finished third while Jeremy Shank of Salem, Ore., and Casey Vitale of Lebanon, Ore., rounded out the top five in the two-day event, the first race of the season on the Oregon-based tour.

Fast qualifier Steve Moore and Shank led early with Joey Tanner taking over and leading up to the midway fuel stop. Tanner resumed his lead in the second half of the race, but during a lap-59 caution period, problems with the right-front of his car sent him into the frontstretch wall.

Johnson inherited the lead but still had his hands full with Shank, who took over on lap 65. But Shank led just three laps as Johnson went back underneath him to lead the last dozen laps.

Notes: Bryan Norton broke a motor in hot laps and scratched from the main event. ... Mike George won a selection between the sixth-place finishers in the consolation races to get an alternate spot. ... The series headed to Cottage Grove Speedway on Monday, where Johnson completed a weekend sweep.