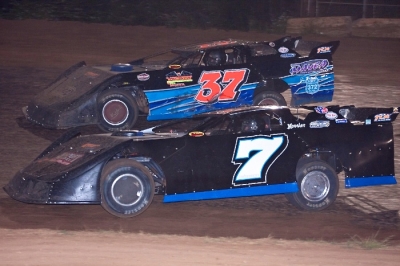 COTTAGE GROVE, Ore. (July 4) — Mike Johnson of Lompoc, Calif., regained the lead from temporary teammate Rob Mayea of Bend, Ore., on the 17th lap and led the rest of the way Monday at Cottage Grove Speedway for a weekend sweep on the Northwest I-5 DIRTcar Late Model Series.

Johnson, who earned $5,000 the day before for his Clair Arnold Memorial victory at Willamette Speedway in Lebanon, Ore., pocketed $2,000 at Cottage Grove for his second career tour victory. | Slideshow

Jeremy Shank of Salem, Ore., who dropped Mayea to third on the 27th lap, was the runner-up at Cottage Grove with Mayea, Jason Wines of Lebanon and Rick Wyatt of Salem rounding out the top five finishers.

The polesitting Johnson, driving a Mayea-owned Victory Circle for the weekend, led the first lap before Mayea took over on lap two. Johnson dropped to third behind Mayea and Shank on the seventh lap, but then gathered up his car to charge back into the lead on lap 17, staying in control the rest of the 49-lap feature.