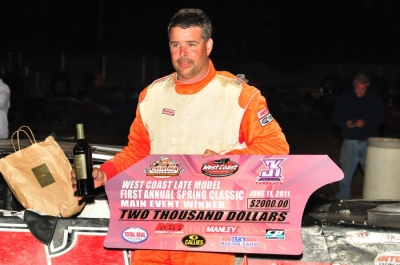 After the race, Drake was impressed with the scenic Napa County racetrack that first began hosting races in 1937. | Slideshow

“It was a great track for our first time here and there was great racing," Drake said. "We’ll come back.”

Polesitter Bobby Hogge IV of Salinas, Calif., jumped out to the lead on the start of the 30-lap race with Mike Kirby of Torrance, Calif., following in the second position. Kirby began to apply heavy pressure for the top spot as the two leaders approached slower traffic. But Hogge was able to fend off the challenge and soon Drake overtook Kirby for second.

Drake quickly closed in on the high-running Hogge, sweeping underneath to grab the lead. Drake led the remainder of the event, dicing his way through traffic with Hogge following and third- running Mike Johnson of Lompoc, Calif., closing in.

While Drake raced to the victory, Hogge made contact with the turn-four wall, allowing Johnson to move by and score the runner-up finish. Hogge regained his composure and held on to third place while fourth went to Clay Daly of Watsonville, Calif. Nick Bartels of El Segundo, Calif., finished fifth.