Detour to Santa Maria worth $5,000 to Glaser 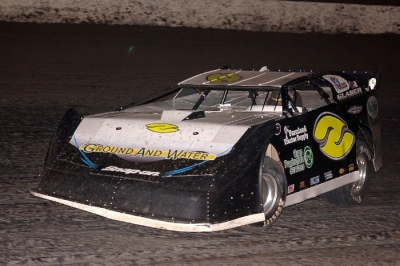 SANTA MARIA, Calif. (May 29) — Rained out from an event in his home state, Trevor Glaser of Tangent, Ore. made a detour — about 800 miles due south — for his first-ever visit to Santa Maria. The detour paid off.

Leading the final 15 laps, Glaser earned $5,000 Sunday in the West Coast Shootout-sanctioned Nationals at Santa Maria, earning some impressive hardware along with a dousing of Champagne in victory lane. The 1,600-mile round trip was worth it for Glaser, who knew he'd have his hands full with California's top racers. | Slideshow

“You have to run scared or these guys will get you," Glaser said, "so I ran scared and didn’t slow down.”

Pounds and Kirby started on the front row of the 40-lapper, battling back and forth until Kirby edged ahead on the second lap. Pounds stayed right with him while Glaser closed in to challenge.

Amid traffic, Glaser took the second spot from Pounds on the 11th lap, and Nick Bartels quickly dropped Pounds to fourth. But Bartels spun after contact from Pounds on the 20th lap, knocking him out of contention as he came to a stop on the frontstretch and nearly collected Hogge and Shannon.

Kirby led the way on the double-file restart, and Glaser went to work on him. Glaser moved underneath the leader in turn two, ran door-to-door down the backstretch, stayed even through turns three and four and went ahead for good on lap 26.

By the 30th lap, Glaser pulled to a straightaway lead while Pounds felt pressure from Kirby. Glaser cruised uncontested the rest of the way for the victory.