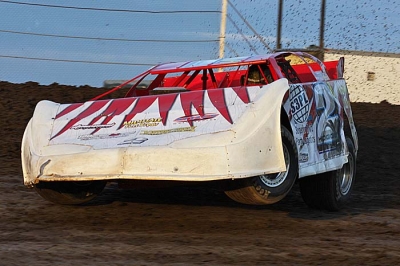 Bobby Hogge IV tunes up at Giant Speedway prior to his $2,000 victory. (raceimages.net)

Notes: Hogge’s Victory Circle Race Car is sponsored by Midstate Fleet Repair and S3PL Logistics. ... NHRA drag racer Ron Capps drove a car supplied by Matt Micheli to an 11th-place finish. ... Jason Selvidge was running third late in the race, but pulled off with mechanical trouble. ... Clark Gugliamoni fell out of the race on the second lap after making contact with the wall. ... The next Western Allstars race is a $2,000-to-win event at Chowchilla (Calif.) Speedway on May 14.