Moyer outruns Doar for two in a row at Tucson 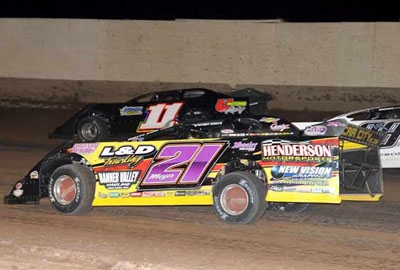 TUCSON, Ariz. (Jan. 14) — Billy Moyer of Batesville, Ark., overtook polesitter Pat Doar of New Richmond, Wis., on the 16th lap and pulled away for a victory Friday at USA Raceway's Wild West Shootout. The sixth-starting Moyer earned $3,000 for his second straight victory in the unsanctioned miniseries and fifth over the last two seasons. | Complete WWS coverage

Doar, who swapped the lead with Jesse Stovall early in the feature, settled for second in the 30-lapper while Jimmy Mars of Menomonie, Wis., came from 11th to finish third. Stovall, of Galena, Mo., and 13th-starting Terry Phillips of Springfield, Mo., rounded out the top five.

Moyer, who led the final 14 laps of Wednesday's feature, was happier with how his car handled in Friday's main event.

"It got the job done. It was a lot more maneuverable tonight where I could move around the track when I needed to," the 53-year-old Moyer said. "We're happy with that. But this is the end of the shows at night, you know, so we've got a little work to do the way I think the track will be the next two nights. We'll just have to stay on top of it."

Doar launched into the lead at the outset with the third-starting Brad Looney of Republic, Mo., in pursuit. Stovall and Moyer, who both started on the third row, were up to third and fourth at the race's lone caution on the third lap as John Lowrey and Frank Heckenast Jr. slowed on the track.

On the restart, Stovall jumped into the second spot and used the low groove to turn up the heat on the high-running Doar. Stovall inched ahead to lead laps six and seven, but Doar swept back into the lead on the eighth lap while Moyer stalked the frontrunners in third.

Moyer dropped Stovall to third on the 10th lap and while running high along with Doar, began testing the low groove exiting turn two. That's where he discovered enough traction midway through the race to blow past Doar on the backstretch, and he stretched his lead the rest of the way, lapping half the field.

"Pat was really good tonight, too. Him drawing on the pole ... I knew we'd have our work cut out trying to get up there to him," Moyer said. "And Stovall ran pretty good there too. I guess he faded (at) the end, but at the start he ran real good. There are some good cars. It's not easy for sure."

The six-race miniseries continues at 1 p.m. Saturday with a $3,000-to-win event for Super Late Models. Sunday's Bill Cheesbourg Memorial wraps up the Wild West Shootout with a $10,000-to-win race.

Outside front-row starter R.C. Whitwell won a first-lap duel with polesitter Bobby Hogge IV and cruised to a 12-lap victory. Polesitter Bobby Hogge IV held second most of the way, but seventh-starting Chris Wall went by with four laps remaining to grab the position. Hogge was third and Clay Daly survived challenges from Mike Balcaen for the final transfer spot. The lone caution appeared on the fifth lap when Paul Mueller spun into the turn-three infield.

Bub McCool, looking for his fourth straight top-five finish in Wild West Shootout action, led all the way from outside the front row, holding off polesitter Jeremy Payne in the closing laps. McCool had a final scare heading for the checkers when the slower car of Jason Papich nearly got sideways in front of him. Billy Moyer Jr. started and finished third, battling most of the way with Mike Johnson, who got fourth. Dylan Smith was a distant fifth.

Outside front-row starter Terry Phillips cruised to an easy 12-lap victory over polesitter Frank Heckenast Jr., who slipped back to fourth early after jumping the turn-two cushion. Heckenast regained second from Dick Barton on the seventh lap, but Phillips was long gone. Barton finished third while Jack Sullivan got the fourth and final transfer spot, holding off Ray Moore.

Fourth-starting Billy Moyer scored key passing points by taking the early lead and dominating the final heat. Home-state driver Joey Moriarty was nearly a straightaway behind in second while Dick Barton started and finished third. Jimmy Mars came from his seventh starting spot to finish fourth. Tony Toste slowed and pulled to the infield on the third lap.

Polesitter Brad Looney jumped to a half-straightaway lead after two laps and never looked back in a caution-free heat. Fellow front-row starter Clay Daly held on to second until a mid-race challenge from Jesse Stovall, who finally wedged past Daly exiting turn two on the seventh of eight laps. Daly slipped up in turn four heading for the white flag, allowing John Lowrey to grab the third spot.

Outside front-row starter Rob Sanders raced to a victory in the caution-free prelim, holding off a charge by fifth-starting Pat Doar, Polesitter John Lobb was further back in third while Tucson natives Jeremy Payne and R.C. Whitwell battled for fourth most of the way with Payne getting the spot. Third-starting Karl Tipton slowed on the second lap and pulled to the infield.

Outside front-row starter Mark Carrell, looking for his first feature start, led all eight laps for a heat-race victory over newcomer Bobby Hogge IV. Sixth-starting Morgan Bagley was third as the top three pulled away from the rest of the field. Last-row starters Billy Moyer Jr. and Frank Heckenast Jr. dueled throughout, but neither could finish among the top four. Garrett Alberson's smoking car pulled up exiting turn four on the first lap; he was pushed to the infield. Newcomer Paul Guglielmoni did a 360-degree spin on the first frontstretch on an early restart but continued.

The miniseries is still looking for its first repeat winner after victories last weekend by Billy Moyer Jr. of Batesville, Ark., and Pat Doar of New Richmond, Wis., and Wednesday's victory by Billy Moyer of Batesville (the father of the opening-day winner). Forty-eight drivers are entered. ... The six-race miniseries continues with Saturday and Sunday afternoon programs, including the $10,000-to-win Bill Cheesbourg Memorial that serves as the finale. ... A passing-points format transfers 12 drivers from heat races to the main event; the other 12 spots are filled by drivers transferring through consolation races. ... Three newcomers join the Late Model field: Paul Guglielmoni of Vacaville, Calif., Bobby Hogge IV of Salinas, Calif., and Ron Bartels of El Segundo, Calif. ... Bartels will be driving his father Bill's No. 77 car; his son Nick is also in action. ... Tony Jackson Jr. of Lebanon, Mo., was scheduled to come to Arizona for the weekend, but an illness canceled those plans; he plans to race during Florida Speedweeks at East Bay Raceway Park in Gibsonton, Fla., and Volusia Speedway Park in Barberville, Fla. ... Modifieds are the only other division in action; factory stocks join the action for the weekend while four-cylinder hornets race Sunday only. ... Listen to announcer Chris Stepan's live play-by-play on Ustream.