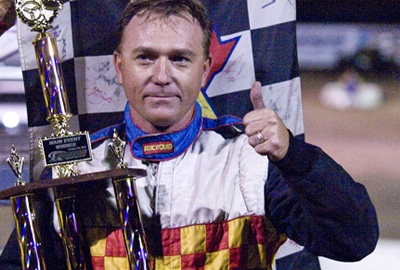 PEORIA, Ariz. (Oct. 29) — Driving a car he hadn't raced all season as he looks toward 2011, six-time series champion Lonnie Parker, Jr. suddenly found himself back atop the Total Seal Late Model Dirt Series points heading into Saturday's finale at Canyon Speedway Park. The polesitting Parker led all the way, fighting off challenges from Nick Bartels of El Segundo, Calif., for his fourth series victory of 2010.

“We just came in here this weekend trying to do are normal deal,” said Parker in victory lane. “We’ve been in a little bit of a slump (with the other car) so we just tried to mix it up a little.”

Consider the experiment a success.

In Friday's main event, Parker stayed out front of a scramble at the outset as Thornton quickly moved from eighth to second, Joey Moriarty moved up to third from seventh and the 10th-starting Bartels moved up to fourth.

Moriarty moved to second on the third lap while Bartels and Thornton battle for third. Bartels got the spot as Jeremy Thornton then dropped his younger brother another position. Ricky Thornton's race ended on the 11th lap when engine wiring got into the fan, throwing the belts.

Bartels, using the all-aluminum CT525 crate engine, repeatedly challenged Parker the rest of the way, but Parker held on for the victory. Moriarty was third while Bruce Duckett was fourth in his best performance of the season. Jeremy Thornton rounded out the top five.

“I haven’t driven this car in a few years and we’re really trying to get better for next year,” Parker said.

Bartels said a fuel pickup problem after the final caution hampered his chances at taking his second career victory on the Arizona-based tour.

“After that last caution I was going to flat-foot it around the top but it just sputtered the final four laps," Bartels said. "It happened in the heat race but I gave it the benefit of the doubt because it got low (on fuel) but there was 11 gallons in it at the end. We'll take it apart tomorrow and see if we can fix it.”