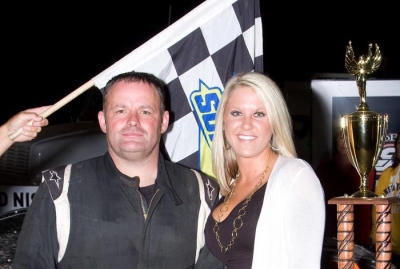 Carrell started in the eighth row and began his march to the front, breaking into the top five for good on the 34th lap and getting up to second behind Rob Mayea of Bend, Ore., on lap 61. Carrell stalked Mayea the rest of the way, making the winning move to take the white flag and lead the 99th and 100th circuits.

The sixth-starting Mayea, who first took the lead on lap 43 and led 55 of 100 laps, settled for second while Jeremy Shank of Salem, Ore., finished third. Polesitter Clay Daly of Watsonville, Calif., who led 31 of the first 42 laps, settled for fourth and Billy Workman Jr. of Canby, Ore., was fifth after lead laps 9-18.