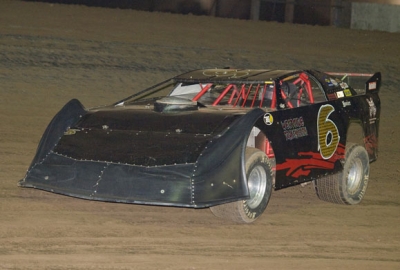 In Saturday's race, Hussak started on the pole and fought off repeated challenges from six-time SWDRA champion Lonnie Parker Jr. for the victory. Hussak hugged the preferred inside lane on the ultraslick desert oval surface for the victory.

The fifth-starting Parker was up to second after just a few laps, but couldn't find a way past Hussak. Anthony Madrid, Ricky Thornton Jr. and Brad Whitfield rounded out the top five.

In Sunday's race, Noll led every lap to become the season's third first-time winner on the series. Parker again settled for second while Brad Williams finished third. Thornton was fourth, one spot better than Madrid.

Parker's runner-up finishes drew him within a few points of the leading Thornton in the title chase.

Notes: In scheduling news, all five SWDRA events at Tucson Raceway Park have been cancelled. ... Added to the schedule is Oct. 15-16 action at USA Raceway in Tucson for the second annual Carl Trimmer Classic, two complete shows. ... California brothers Chris and Cody Barnett joined SWDRA at Canyon for the second time this season. ... Mike Tahtinen gave up his seat to veteran Paul Banghart and Mike Brigner drove a second Tahtinen-owned car. ... Anthony Madrid was in a recently acquired MasterSbilt from Mars, while teammate Ricky Thornton Jr. drove the Rocket that Madrid had been driving. ... Madrid's MasterSbilt is from Cory Hemphill, who traded it for a modified chassis. Hemphill, an SWDRA winner July 4 at Thunder Raceway in Show Low, Ariz., is apparently done racing Late Models for the rest of the season. ... Jeff Manka planned to return to action, but when Ricky Thornton Jr. lost an engine on practice night, Manka gave up his car to Thornton. ... Next up on the series is a Sept. 18 event at Prescott Valley (Ariz.) Raceway.