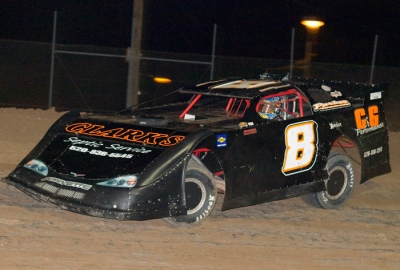 PEORIA, Ariz (July 17) — Lonnie Parker Jr. took another step in his quest for his seventh Total Seal Southwest Dirt Racing Association championship Saturday at Canyon Speedway Park with his third series victory of the season. Parker took the early lead from outside the front row, surrendered the point to Anthony Madrid on lap 13, then regained it three laps later and motored to his 61st career series victory. | Slideshow

Running a rapidly deteriorating high line early in the 30-lapper, Parker left himself vulnerable to Madrid — always strong in the low groove — who discovered the low-side moisture and used what became the preferred grove to slide underneath for the lead.

“The top was fast early,” Parker said in victory lane, “but starting up front, you don’t know what the track is doing or where everyone else is running. I’d rather start in the second row sometimes to see how the race plays out.”

After watching Madrid steal the lead, Parker doubted whether he could get the lead back knowing Madrid’s success around Canyon’s low line. When Madrid’s car began to falter as a result of a sticking right-front brake, Parker got new life and rolled back into a lead he wouldn’t give up the final 14 circuits.

Madrid fell into the clutches of Noll, part-time SWDRA campaigner and modified regular. Making his third appearance in Keith McKinney’s No. 6, Noll survived an early three-wide battle for third with Thornton and Fincher before securing the runner-up spot on lap 17.

Notes: Parker’s GRT Race Car carries sponsorship from Parker Concrete, C&G Performance, Torco Race Fuels and Clark’s Septic Service. ... Anthony Madrid returned to action in Mike Tahtinen’s No. 24 GRT Race Car as he awaits repairs to his Manka Motorsports-fielded Rocket Chassis. ... Brad Williams returned to the seat of his own No. 23 Rocket after making repairs from a crash two weeks earlier; he’d also a start in Tahtinen’s car. ... The next scheduled SWDRA event on Aug. 7 at Tucson (Ariz.) Raceway Park has been cancelled. The track won’t be ready for its planned transformation from asphalt back to dirt.