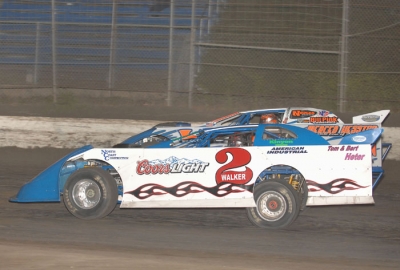 Shannon dueled with Johnson early, and pressured him again side-by-side after a lap-23 restart, but Johnson stayed in control at the third-mile oval.

Shannon slipped back to third at the finish as eighth-starting A.J. Kirkpatrick, who dropped out of the top 10 earl in the race, rallied back to finish second in one of the biggest California Late Model events this season. Former track champion Steve Drake of San Luis Obispo Calif., was fourth and Mike Kirby of Torrance, Calif., rounded out the top five.

Bobby Hogge IV of Salinas, Calif., started third and ran among the leaders much of the way before a spin knocked him from contention.

Among other cautions was a lap-23 scramble between turns three and four for John Lowrey, Chet Buckley and Jason Selvidge.