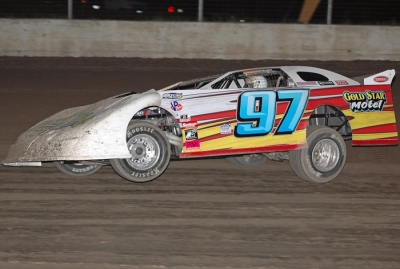 Kirchoff, of Gillette, Wyo., had a half-track margin on Henrikson and was threatening to lap competitors in the top five before the center tore out of his right rear wheel and he got into the concrete wall, tearing the spoiler off his car. | Slideshow

The third-starting Henrikson inherited the lead after the race's lone caution and led the rest of the way for the $1,200 victory. Kirchoff was going for his third straight victory after back-to-back triumphs the previous weekend at Dodge City (Kan.) Raceway Park.

The night's action was marred by a two-car crash in a heat race involving J.T. Botts of Broomfield, Colo., and Shad Karna of Custer, S.D., as they got into the concrete wall after tanging on the backstretch, according to the Rapid City Journal. After a lengthy extrication, Botts was placed on a backboard and taken to Rapid City Regional Hospital as a precautionary measure. Botts was released with no serious injuries.