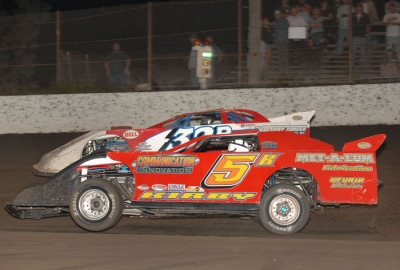 Daly, of Watsonville, Calif., led early on a ripply surface at the quarter-mile oval with Kirby and outside front-row starter Bobby Hogge IV of Salinas, Calif. in pursuit. Hogge dropped to the infield on a lap-four caution to fall from contention while Chris Shannon of Merced, Calif., and Drake moved up a spot.

Kirby, running lower than Daly, kept up the heat following a pair of a lap-seven cautions, including Jason Selvidge's spin exiting turn two. A few laps later, Kirby slipped underneath to take command in turn two when Daly car got out of shape after hitting a rough spot.

Kirby led the rest of the way, but things got interesting when Drake took second from Daly and pressured the leader on the inside. A caution slowed Drake's charge, and with Daly reset in second for the restart, he went to the high side to pull alongside the leader before another caution slowed the action for a turn-four tangle between Johnny Cardoza and Ron Bartels.

Kirby held on the rest of the 25-lapper for the victory with Daly, Drake, Shannon and Nick Bartels of El Segundo, Calif., rounding out the top five.

Hometown driver John Lowrey ran third early in the race but dropped out with a 14th-place finish.

Notes: Kirby's Victory Circle Chassis is sponsored by Communication Innovation and Met-A-Lum Fabrication. ... Kirby, last year's West Coast Shootout points champion, last won on the series Sept. 6 at Santa Mario Speedway. ... Ron Bartels was celebrating his 51st birthday. ... Brad Pounds scratched from the main event after his No. 15B was heavily damaged in a heat race tangle where Dino Napier's car ended up atop Pounds. ... Next up for West Coast Shootout competitors is a $2,000-to-win event on May 1 at Thunderbowl Raceway in Tulare, Calif.