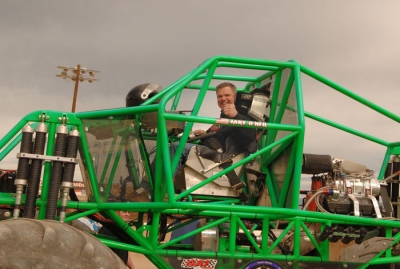 Jimmy Mars tried out a monster truck before his victory. (photofinishphotos.com)

First, Mars drove more aggressively, and second, none of his 23 competitors were ever within striking distance after the green flag flew in the 40-lapper.

Mars dominated all 40 laps, building leads of more than a full straightaway and lapping more than half the field in adding the miniseries finale to his victory in the Jan. 9 opener.

"It was going to take a lot more for me to give this one up," Mars said in victory lane. "I was a little PO'd with myself from last night. I was a little bit more aggressive in the lapped cars than what I was last night. We made a couple of changes and tweaked a little bit on the car tonight, and I could move just about anywhere on the track."

Mars earned his fourth career Wild West Shootout victory and the winning purse of the richest Arizona race since 2005.

"It definitely helps our pocketbook out, by all means," Mars said. "This just finishing up in the top five has been just awesome, the new car and stuff that we came out here with. Other than the night I goofed up and got in the slime and got into the wall, I think we were in the top three every night."

The only driver to stay in sight of Mars was sixth-starting Jeremy Payne, a Tucson native now living in Springfield, Mo. Payne made a sixth-to-second charge on the first lap and held that position the rest of the way, finishing a straightaway behind.

"We've been working out butts off to get this car to go around this racetrack," said Payne, whose best previous miniseries finish was 11th. "We finally figured it out Wednesday night and just haven't had a bit of luck. We've been caught up in some wrecks in the heat races and running second to Terry (on) Friday night and broke a hub, stuff like that. Tonight, the track was awesome, I had a good heat race so I got a good start in the A-feature. I was trying to catch Jimmy. He's pretty good.

"I could keep up with him if I was able to run the top in the open track. He could maneuver through the lapped cars better than I could, and that's what got him the win."

Billy Moyer Jr. of Batesville, Ark., rallied from his 22nd starting spot to finish third while John Anderson of Omaha, Neb., and Randy Korte of Highland, Ill., rounded out the top five. Outside front-row starter Rob Mayea of Bend, Ore., completed a single lap, pulling out while running third.

The feature was slowed by a single caution for a lap-two accident that piled up 10 cars in turn two, mostly back in the pack. Billy Moyer, the third-place finisher's father and winner of three miniseries races, suffered heavy right-side damage and ended up seventh.

Notes: Mars drives an MB Customs Chassis with a Pro Power Engine sponsored by Deppe Enterprises, Baileigh Industrial, Keyes Chevytown and T.L. Sinz Plumbing. ... Five drivers made all six features: Billy Moyer, Pat Doar, Chris Shannon, Jeremy Payne and Lance Matthees. ... John Lowrey and Terry Phillips made five features heat race accidents knocked them out of Sunday's race. Phillips made hard contact with the turn-three wall after a tangle with Dan Henrikson during the first heat. Phillips sat in the car a few minutes after the wreck but eventually emerged complaining of minor left ankle and right wrist pains... Kelly Boen ran second early in the third heat race but fell out after getting into the backstretch wall. ... Billy Moyer's car showed smoke during his heat race. The team swapped oil pumps before he won his consolation race going away. ... Late Model regular Eric Turner of Springfield, Mo., won Sunday's modified feature driving the No. 02 of Tucson driver Jeff Sires.