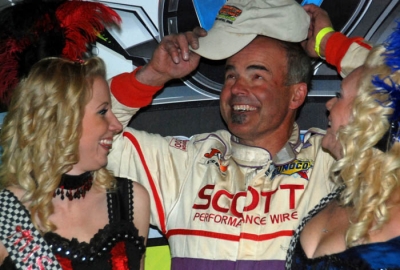 Billy Moyer puts on a cap in victory lane. (DirtonDirt.com)

TUCSON, Ariz. (Jan. 16) — When the peppy trophy queens at USA Raceway saw Billy Moyer heading for the top of the track's podium, one asked: "Are you up here again?"

Indeed Moyer made his third trip to victory lane Saturday in capturing Round 5 of the Wild West Shootout, earning $3,000 after outdueling Jimmy Mars over the final 10 laps at the 3/8-mile oval in southern Arizona. Moyer's second victory in as many nights was the fourth of his career in miniseries and established him as the favorite for Sunday's $10,000-to-win finale. | Complete WWS coverage

The fifth-starting Mars, of Menomonie, Wis., nearly stole away with his second Wild West Shootout victory after taking the lead on the 22nd lap, but Moyer slipped back by with an outside pass amid lapped traffic on lap 27 to increase his earnings to more than $13,000 after five races in Tucson.

"I knew Jimmy would be coming there," said Moyer, a Hall of Fame driver from Batesville, Ark., with more than 700 career victories. "I was kind of doing my own deal there and he snuck by us there down in that little wet strip. I just had to go back to work there for a little bit.

"I don't think I was going to pass him on the clear track again, but we went into those lapped cars ... They had him blocked, so I just had to go elsewhere there, and it just worked out good for us."

Mars began drawing away from Moyer after taking the lead, but when he came upon the lapped cars of Mike Balcaen and a low-running Dean Moore, Moyer took advantage and went back ahead with an outside move in turn one.

"I got too conservative in lapped traffic there," Mars said. "Maybe I showed myself too fast. I should've just waited a couple of laps, because you're not going to screw up too many times with Billy and him not pass you back.

"I passed Billy there on the bottom and I got to the lapped cars and I was passing 'em pretty good. And then we caught a couple of more and they screwed up a little bit, and it slowed my momentum down, and if you get slowed down here at all, it screws you right up."

Mars cross the finish line five lengths behind in second while polesitter Will Vaught of Crane, Mo., who led the first three laps, recorded his second straight third-place finish in Tucson. Lance Matthees of Winona, Minn., and Chris Shannon of Merced, Calif., rounded out the top five at the 3/8-mile oval in southern Arizona.

The feature was slowed by a two cautions, neither for serious incidents. The first yellow waved on the 11th lap when A.J. Kirkpatrick and Frank Heckenast Jr., tangled, spinning into the turn-one infield. On the 12th lap, Blaine Doppler's car briefly climbed the turn-three wall before returning to the track and spinning 180 degrees.

Notes: Moyer's Victory Circle Chassis is sponsored by L&D Trucking, Banner Valley Hauling and Henderson Motorsports. ... Terry Phillips fell out of the first heat when contact with another car broke his right-front suspension. He rallied from the tail of a consolation race to finish third and transfer to the main event. ... Dean Moore made a last-lap pass of Matt Aukland in the same consolation to earn a transfer spot. ... Nick Bartels was running in the fourth and final transfer spot in the second consolation but dropped out with fewer than two laps remaining; Brad Seng got the spot. ... Eight Late Model drivers have made all five miniseries features, including two Californians, Chris Shannon and John Lowrey. ... Wide-traveling racing vendor Harold Clark of Wichita, Kan., who had been set up behind the track grandstands all week, was found dead in his hotel room Saturday, track officials announced. ... Sunday's event honors Tucson native Bill Cheesbourg, a six-time Indianapolis 500 starter. He won several championships at Corona Speedway in Tucson and Manzanita Speedway in Phoenix. Cheesbourg died in 1995 at age 68. ... R.C. Whitwell, a regular in SWDRA Late Models, won Saturday's modified feature.