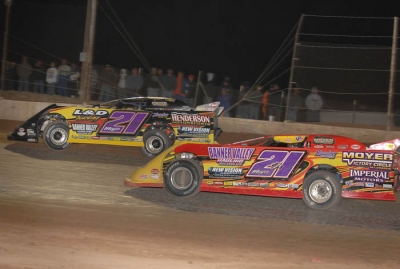 TUCSON, Ariz. (Jan. 15) — It wasn't quite the revenge he might've been seeking, but Hall of Famer Billy Moyer of Batesville, Ark., got the better of Terry Phillips in Friday's fourth round of the Wild West Shootout at USA Raceway.

Rebounding from Wednesday's last-lap loss to Phillips, the 15th-starting Moyer inherited the lead on the 27th lap when Phillips departed with engine problems. Moyer earned $3,000 and became the first two-time winner on the Arizona miniseries in 2010. | Complete WWS coverage

Moyer nearly pulled off the track himself early in the race after clipping a turn-four tire barrier. But the 51-year-old veteran overcame his car's handling problems to get up to fourth on a lap-24 restart.

Phillips, the Springfield, Mo., driver who slipped under outside front-row starter Lance Matthees to take command on the second lap, cruised most of the way and appeared to have the race in hand with six laps remaining, but he slowed and abruptly pulled into the infield on the backstretch on lap 27, just after Moyer had taken the second spot from 11th-starting John Anderson of Omaha, Neb.

Suddenly out front, Moyer sailed to victory the final two laps while Anderson settled for second, his best Wild West Shootout finish since back-to-back victories in 2008. Will Vaught of Crane, Mo., rallied from 18th to finish third while Steve Drake of San Luis Obispo, Calif., and tail-starting Randy Korte of Highland, Ill., rounded out the top five on a slick racing surface.

Moyer said his Victory Circle Chassis was "way, way, way off" after he clipped one of the huge white tires inside turn four in the first few laps.

"I started to pull in on one of them yellows, and I thought, 'Well, I'll try it one more restart and see what happens,' " Moyer said. "Maybe I figured out how to drive it a little bit different and it picked up a little bit. The last couple of restarts it wasn't bad at all."

Engine problems cost Phillips a golden opportunity for back-to-back victories and teammate Jeremy Payne, an Arizona native, also ran into problems after running a close second to Phillips in the early going. A broken right-rear hub knocked Payne out on the 12th lap.

Moyer lost a tight duel with Phillips in Wednesday's race at Tucson, but he didn't get the chance to settle it on the track Friday with the departure of Phillips.

"With the shape the car was in there, it would've taken a miracle, probably, to get by him," Moyer said. "Right when I got into second is sort of when he had trouble, so I never got to see him much. We'll never know that now, I guess."

The feature was slowed by four cautions. Joey Moriarty spun in turn two on the third lap and Chris Shannon hit a turn-two tire barrier on the restart for another yellow. Payne's departure caused the third caution and Billy Moyer Jr., who ran in the top five early and as high as second midway through the race, slowed with a flat right-rear tire on lap 24.

Wild West Shootout action continues with another $3,000-to-win feature on Saturday and the $10,000-to-win Bill Cheesebourg Memorial on Sunday.

Notes: Moyer's Victory Circle Chassis is sponsored by L&D Trucking, Banner Valley Hauling and Henderson Motorsports. ... First-night winner Jimmy Mars missed the feature. The reigning Dirt Track World Champion got into the backstretch wall while trying to overtake Grant Junghans in the first heat race, forcing him to start near the tail of a consolation race. He finished two spots shy of transferring to the main event. ... Tyler Reddick led most of the way in the fifth heat, but he briefly lost control on the backstretch, allowing winner Steve Drake past before he slid into the turn-three wall. ... Kelly Boen and Adam Crippen tangled in turn four, knocking them both out out of the fourth heat. ... Will Vaught made a last-lap pass of Chris Shannon to win the second consolation. ... NASCAR veteran Kenny Wallace competed in the modified division and addressed the crowd with a microphone on the frontstretch during intermission. ... Adam Crippen won the dazzling modified feature, winning a back-and-forth battle with Alex Stanford on the last lap. Stanford led out of turn four, but Crippen dove under him heading down the frontstretch for the narrow 25-lap victory. R.C. Whitwell appeared to have the $1,000-to-win race in hand before losing a driveshaft with two laps remaining.