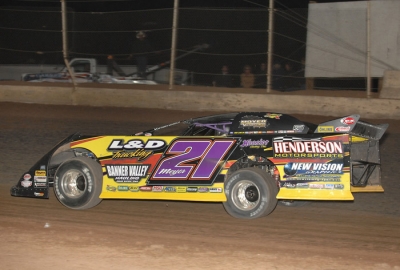 TUCSON, Ariz. (Jan. 10) — Polesitter Billy Moyer of Batesville, Ark., led all 30 laps Sunday at USA Raceway to capture the second round of the fourth annual Wild West Shootout. The 51-year-old Hall of Fame driver collected $5,000, the second-richest purse during the six-race miniseries that runs through next weekend. | Complete WWS coverage

Moyer blitzed the field from the outset, leading by a straightaway after three laps and dominating the race before a midway caution allowed Saturday winner Jimmy Mars of Menomonie, Wis., to catch up. But Mars, winner of his previous four starts, couldn't keep up with Moyer, who edged away on lap 25 after the second and final caution en route to his second career Wild West Shootout victory.

The sixth-starting Mars, who led all 30 laps the previous night, settled for second while Terry Phillips of Springfield, Mo., climbed from the ninth starting spot to finish third. Kelly Boen of Henderson, Colo., ran as high as second before finishing fourth, the position where he started, and Don Shaw of Ham Lake, Minn., rounded out the top five. Pat Doar of New Richmond, Wis., started 13th and ran as high as fifth before fading back to 10th. Rylan Long of Greenfield, Mo., started outside the front row but faded quickly from contention, ending up 13th.

The midway caution appeared for debris while the final yellow appeared when hometown driver Jeremy Thornton and Will Vaught of Crane, Mo., got together in turn two.