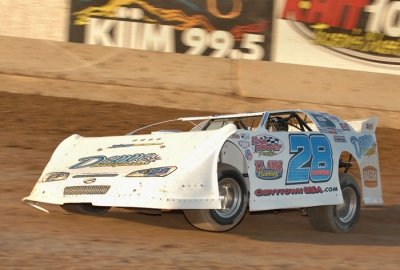 Jimmy Mars tunes up at Tucson on Saturday. (photofinishphotos.com)

The polesitting Mars, who won 19 races in '09 including an unprecedented three $50,000 paydays, launched his 2010 season with a dominating victory in the first leg of the fourth annual Wild West Shooting, earning $3,000 for a flag-to-flag 30-lap victory at USA Raceway. | Complete WWS coverage

Dominating most of the race, Mars kept a charging Kelly Boen of Henderson, Colo., at bay after two late cautions for the victory in the first of six races at Tucson, a miniseries that draws drivers from the West, Midwest and beyond.

Boen made up ground on Mars in the second half of the race before cautions appeared on laps 27 and 28, but he lost the second spot to fifth-starting Randy Korte of Highland, Ill., on the final lap. Hall of Famer Billy Moyer of Batesville, Ark., advanced eight spots to finish fourth and third-starting John Anderson of Omaha, Neb., rounded out the top five. Arizona standout Lonnie Parker Jr. of El Mirage started outside the front row and faded to finish eighth.

The race was slowed by four cautions. Mike Balcaen's smoking car slowed early while Jeremy Payne spun and pulled out before the halfway point. Lance Matthees slowed to draw a lap-27 caution. On the lap-27 restart, John Lowrey and Brad Looney were part of the final yellow.