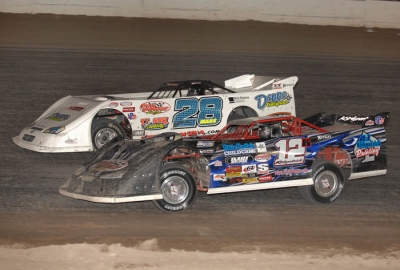 LAS VEGAS, Nev. (Nov. 21) — Jimmy Mars lived up to his pre-race favorite status with a victory in Saturday night’s 50-lap Silver State DIRTcar Championships finale at the Dirt Track at Las Vegas Motor Speedway. But the superstar driver from Menomonie, Wis., had to survive a late-race onslaught from Trevor Glaser of Tangent, Ore., in order to complete a sweep of the topless racing weekend. | Notebook | Slideshow

Glaser, a 31-year-old who missed most of 2009 after breaking his arm in an April racing accident, ran down Mars in the closing stages and actually slipped ahead to lead lap 48. But the Pacific Coast standout had his momentum dulled by a lapped car that blocked his path rounding turns one and two, allowing Mars to regain command and hold on for the $5,000 victory.

“It’s awesome,” the 37-year-old Mars said of backing up his Friday-night preliminary-feature score with a thrilling down-to-the-wire triumph in his Deppe Enterprises-sponsored MB Customs Chassis. “I always love racing out there at Vegas. Hopefully we can drink old Harrah’s (the casino on the nearby Las Vegas Strip) out of beer tonight — that way we’ll know we did a good job of celebrating.”

Mars, who entered the weekend as the country’s hottest dirt Late Model driver (three $50,000 victories in 2009) and with four wins in six starts to his credit at LVMS over the 2007-2008 seasons, appeared headed to a runaway victory when he built a near-straightaway edge on the field midway through feature. But Glaser refused to let the event’s highest-profile entrant leave Sin City without a fight.

Glaser, who started seventh but nearly fell out of the top 10 early in the race, overtook Kirkpatrick for second following a lap-33 restart and then slowly inched toward Mars. The Oregonian pulled up to Mars’s rear bumper exiting turn four on lap 45 and led lap 48, but he couldn’t pull off the upset. Mars counted his lucky stars after securing his sixth career win at the half-mile LVMS oval.

“I saw Trevor (surge ahead on lap 48),” said Mars, who started second. “Luckily enough there was a lapped car that was kind of his pick (in turns one and two) and I was able to get back in front of him.”

Glaser, who ironically used a carburetor that he borrowed from Mars, could only mourn his fate after coming so close to slaying one of dirt Late Model division’s titans.

“I was killing him coming out of (turn) four, but he’d cut up in front,” said Glaser, who found more traction higher up the track. “I finally got up far enough alongside him off the corner to get by him — and the next lap a car came up and blocked me off. I got help from traffic, and then I got hurt by it.”

A runner-up finish to Mars was disappointing but still honorable for Glaser.

Three caution flags slowed the event, but none were for serious incidents. Andy Obertello of Hollister, Calif., spun in turn four on lap 131; John Duty of Portland, Ore., twirled into the turn-one wall on lap 18; and Pat Doar of New Richmond, Wis., stopped in turn four on lap 33.