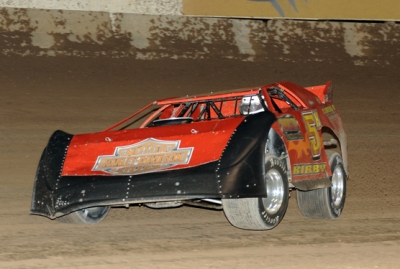 Lonnie Parker Jr. of El Mirage, Ariz., wasn't in the mix among the leaders in the late-going of the season-ending SWDRA event, but his sixth-place finish was good enough to wrap up his sixth consecutive series championship.

Jamie Throckmorton started on the pole, but it was Balcaen and Kirby going at it in the early laps with Balcaen leading in the backup car of Colorado driver Dean Moore. (Balcaen broke an engine in Thursday's practice).

R.C. Whitwell of Tucson, Friday night's SWDRA winner, took second from Balcaen midway through the race and held that spot until the final laps when Moore slipped past. Moore held on for his second straight runner-up finish with Whitwell, Balcaen and Clay Daly of Winton, Calif., rounded out the top five finishers. Throckmorton pulled off the track after falling off the pace and ended up 16th.