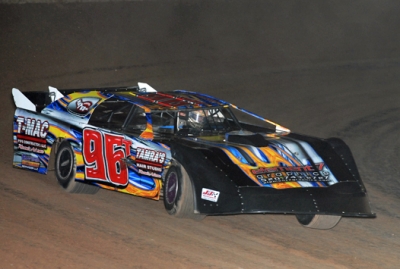 TUCSON, Ariz. (Nov. 6) — On a night when tribute was paid to his late grandmother, hometown driver R.C. Whitwell raced to a dominating 25-lap victory in Southwest Dirt Racing Association action at USA Raceway.

Whitwell's grandmother, a dedicated racing fan and regular at the track, died earlier in the week and a lovely flower arrangement was placed in her usual seat in the grandstands. Those sitting around the impromptu memorial watched Whitwell race to a $1,000 victory in the first leg of the Carl Trimmer Classic. | Slideshow | Total Seal joins SWDRA as title sponsor

SWDRA drivers will return to USA Raceway on Saturday for event's conclusion, a $2,000-to-win event that wraps up the series season and likely Lonnie Parker Jr.'s sixth consecutive series championship.

Parker started outside the front row and tried to keep up with the polesitting Whitwell at the start, but Whitwell took command and raced to his second series victory of the season, and second of his career.

Mike Kirby of Torrance, Calif., challenged Whitwell after a lap-eight restart, and Dean Moore of Grand Junction, Colo., moved into second on the 18th lap and did his best to catch Whitwell. Moore settled for second ahead of Kirby, Anthony Madrid of Phoenix, Ariz., and Parker.

Notes: Whitwell's No. 96T is sponsored by Tamra's Hair Studio, T-Mac Construction and Element 7 Pro Graphics. ... Joey Moriarty ran just outside the top five before spinning on the last lap and ending up 15th. ... The event drew 32 drivers from four states and Canada (Mike Balcaen, who has made regular visits to Arizona in recent years). ... Among drivers failing to make the feature: Nick Bartels (his car broke in a consolation race) and Jeff Manka.