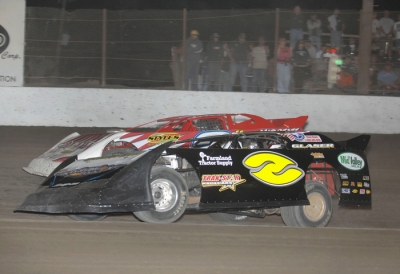 BAKERSFIELD, Calif. (Oct. 9) — A broken arm suffered in an April racing accident limited Trevor Glaser's racing action in his home state, but the Tangent, Ore., driver has made the most of his trips to California in the 2009 season.

Glaser notched his second victory of the season at Bakersfield Speedway on Friday, earning $2,000 in the opener of the 24th annual Budweiser West Coast Nationals. The third-starting Glaser outran Bobby Hogge IV of Salinas, Calif., for a victory in the unsanctioned event. The $3,000-to-win finale is set for Saturday at the third-mile oval. | Slideshow

Glaser's previous Bakersfield victory came March 14 in a West Coast Shootout event. In April's season opener at Willamette Speedway in Lebanon, Ore., Glaser broke his arm in an accident that kept him off the track until August.