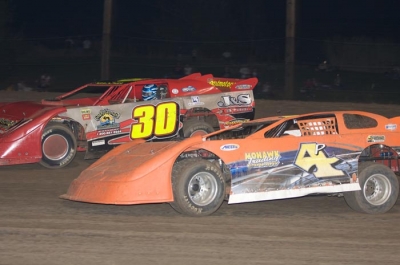 MEDFORD, Ore. (Sept. 26) — Giving California drivers a sweep of the weekend at Southern Oregon Speedway, outside front-row starter Richard Papenhausen of Chico, Calif., led all 40 laps Saturday for a $1,500 victory in the finale of the Northwest I-5 DIRTcar Late Model Tour. | Slideshow

Polesitter Jeremy Shank of Salem, Ore., ran second throughout the race for a finish that gave him the narrowest of margins in overtaking John Duty of Portland, Ore., for the series championship. Shank won his first series title by a single point over Duty, who rallied from his 16th starting spot to finish fourth. Duty led by five points entering the finale.

Rob Mayea of Bend, Ore., was third with Duty and Mark Carrell of Redmond, Ore. Sixth-finishing Jimmy Whisler of Otis, Ore., was the only other driver on the lead lap of a race that went green the final 38 laps after a lap-two caution.

Nick Bartels of El Segundo, Calif., who won Friday's Battle of the Border weekend opener, was a lap down in seventh in a race where all but two of 21 starters were running at the finish.

Notes: Papenhausen's Rocket Chassis is sponsored by Dave Papenhausen Construction. ... Rick Wyatt parked with engine problems after 21 laps. ... Mike Miller tried to make repairs after a second-lap wreck but wasn't able to get back on the track before the race went back to green. ... Billy Workman Jr. finish eighth using a crate engine after breaking his primary open-competition powerplant the previous night. ... Shaun Mayea, nephew of third-place finisher Rob Mayea, made just his second start of the season driving a former John Duty car he normally pilots in Limited Late Model action. ... Dustin Dittman, the modified rookie of the year at Willamette Speedway in Lebanon, Ore., made his first career Late Model start in a Ron Shinkle-owned Trak-Star Chassis. Shinkle qualified the car but wasn't feeling well and turned the wheel over to Dittman, who normally serves as crew chief for former I-5 Tour champion Trevor Glaser. ... Among other drivers failing to make the feature: Craig Hanson, Ryan Gerig, Randy Neal, Brady Sell and Brett James.