Bartels wins at Medford for first I-5 Tour victory 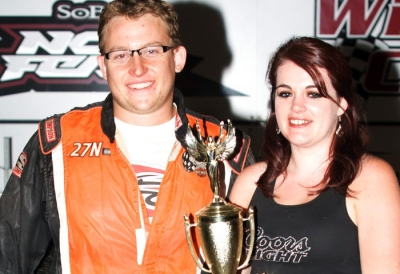 The 21-year-old Bartels earned $1,500 in the second-to-last series event of the season as Southern Oregon hosted the season-ending doubleheader.

Jimmy Whisler of Otis, Ore., finished just behind Bartels in second while Steve Moore of Scio, Ore., was third. Jimmy Schram of Vancouver, Wash, and 16th-starting Richard Papenhausen of Chico, Calif., who pitted early to change a flat left-front tire, rounded out the top five in a race slowed by a handful of cautions on a racetrack that maintained moisture throughout the night.

Mark Carrell of Redmond, Ore., actually crossed the finish line in fifth, but he was placed in 13th at the tail of the lead-lap cars for failing to cross the scales after the race.

Shank, who entered the event just two points behind series leader John Duty of Portland, Ore., faded from contention and ended up spinning between turns three and four while running eighth. He ended up 11th in the feature and stands five points behind Duty, who rallied from his 10th-row starting spot to finish 10th.

Notes: Nick Bartels drives a Rayburn Race Car with a Bill Wood Racing Engine and sponsorship from Bartels Harley-Davidson. ... Joey Tanner's 19th-to-seventh finish earned him hard charger honors. ... Roger Lorenzini Jr. pulled out with an overheating car. ... Dane Smith retired with damage from an accident. ... Craig Hanson was parked by series official after retaliating against Rob Mayea during a caution period. ... The smell of nearby forest fires was in the air at the track. ... Top points contenders John Duty and Jeremy Shank were both using new powerplants. Shank was using an engine supplied by fellow driver Cody Sell and Duty was using a powerplant purchased from Illinois-based Moring Motorsports. ... Among drivers failing to make the feature: Rick Wyatt (motor), Rob Campos (missed transferring from B-Main by one spot), John Campos (nearly flipped running in transfer spot in B-Main), Billy Workman Jr. (fifth in points). ... Jason Wines finished eighth using a crate engine. ... The series finale, a 40-lap feature, is scheduled for Saturday at Southern Oregon.

Correction: Fixes car count to 42 cars, the spelling of Shaun Mayea and Trent Elliot, and the chassis make of Bartels.