Walters gets by Sell, rides off into Sunset 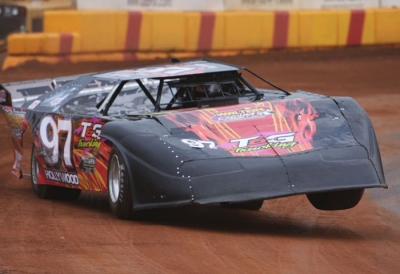 Sell settled for second at the quarter-mile oval while Jason Wines of Lebanon, Ore., rallied from 11th to finish third. Billy Workman Jr. and Jeremy Shank rounded out the top five in a race slowed by a single lap-eight caution for debris.

Notes: Randy Neal won his heat race, but was caught up in a wreck during the dash which forced him to scratch with a broken rear end. ... Seven drivers using Crate engines competed in the feature including the third-place finisher and hard charger Jason Wines. ... Series points leader John Duty of Portland, Ore., hit the wall as he concluded his qualifying lap when a rock got wedged between the right-front spindle. ... Among drivers failing to make the feature: Brian Cronk, Rob Campos, and Jimmy Whisler. ... The series returns to action Sept. 3 with the lone series event at Skagit Speedway in Burlington, Wash., before a Sept. 5-6 doubleheader at Willamette Speedway in Lebanon, Ore.