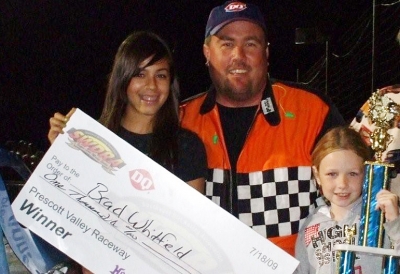 PRESCOTT, Ariz. (July 18) — Series rookie Brad Whitfield of Casa Grande, Ariz., led all the way from his pole position at Prescott Valley Raceway for his first victory on the Southwest DIRTcar Racing Association. Whitfield held off five-time SWDRA champ Lonnie Parker Jr. for a victory in a caution-plagued, curfew-shortned race.

"I knew I needed to keep my line and run the bottom to win," Whitfield said after taking the checkered flag ahead of Parker in his car ownered by Dwayne and Tamra McRae.

Parker, who started seventh, was followed across the finish line by Tucson, Ariz., drivers Jeremy Thornton, Keith Noyes and R.C. Whitwell, who rallied from his 13th starting spot in gunning for his second straight series victory. Casa Grande's Tommy Hussak III started outside the front row and ended up sixth at the third-mile oval.

The race was shortened to 16 laps because of frequent cautions that threatened to carry the night's racing past the 11 p.m. curfew.

Notes: Whitfield's racing career began in the factory stock division in 1992, and he has recently moved into Late Models. ... Anthony Madrid and Jeremy Madrid were battling for third exiting turn four when contact triggered a wreck that ended Madrid's night. ... Only 10 drivers were running at the finish. ... Next up for SWDRA competitors is a newly scheduled event on Aug. 15 at Canyon Speedway Park in Peoria, Ariz.