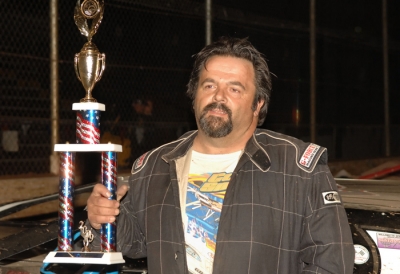 COTTAGE GROVE, Ore. (July 5) — Fifth-starting Steve Moore of Scio, Ore., slipped under Joey Tanner in turn two on the sixth lap at Cottage Grove Speedway to win the finale of the Fourth of July weekend tripleheader on the Northwest I-5 DIRTcar Late Model Series. Moore earned $1,500 for his first series victory since the 2002 season finale in Medford, Ore. | Slideshow

Series points leader John Duty of Portland, Ore., who saw a fourth-to-second move on the 25th lap negated by a caution, was fourth while Billy Workman Jr. of Aurora, Ore., rounded out the top five. Tanner, of Portland, ended up 10th.

Jimmy Whisler of Otis, Ore., winner of the weekend opener in Medford, was battling with Rob Mayea of Bend, Ore., for top-five positions when they got together on a lap-18 restart. Mayea spun and retired with mechanical problems while a puncture radiator forced Whisler out.

Notes: Rob Mayea had a tough night besides his problems in the feature. He suffered burns and shrapnel-type arm wounds after a line connected to a nitrogen bottle exploded. He was refilling a shock for California driver Clay Daly when the accident happened. No one else was hurt. ... John Campos was also involved in the lap-18 collision between Mayea and Jimmy Whisler. ... Most drivers stuck with the low groove through the feature event after the bottom of the track was watered before the race, but fourth-place finisher John Duty ran higher on the track. ... A red flag appeared on the second lap for a multicar pileup that blocked the frontstretch. California's Nick Bartels and 16-year-old Oregon driver Brian Cronk got together exiting turn four to trigger the wreck, but everyone was able to continue. ... Cronk rallied back to ninth before spinning on lap 25 to draw the seventh and final caution ofthee feature; he retired with a broken right-front shock. ... Mike DeSilva's car broke a rear end in hot laps, scratching him for the night. ... Ryan Gerig, who entered the event fourth in series points, missed the race because of mechanical problems with his car. ... Rick Wyatt and Justin Dittman were also among no-shows related to damage and mechanical problems from the previous night's event at Willamette Speedway in Lebanon, Ore. ... The series returns to action Aug. 14 for an event at Sunset Speedway Park in Banks, Ore.