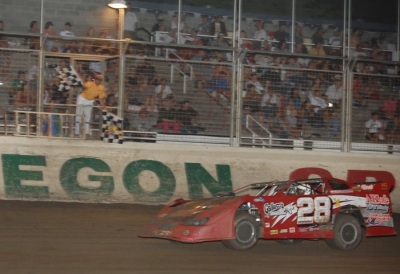 Whisler moved under polesitter John Duty of Portland, Ore., in turn two on the 34th lap and led the rest of the way in the caution-plagued event. A final caution set up a two-lap dash to the finish, but Duty couldn't find a way past Whisler and settled for second.

Rob Mayea of Bend, Ore., who started 13th and twice had to go to the rear or being involved in accidents, salvaged a third-place finish and California invader Clay Daly of Watsonville led a few laps early and finished fourth, the last driver on the lead lap.

Only four other drivers were running at the finish of a race slowed by 15 cautions, the most serious for Ryan Gerig's lap-27 accident that saw him ride up the frontstretch wall. He wasn't injured, but because of the frequent cautions, officials threw a red flag during the cleanup of Gerig's car and allowed teams to fuel cars and provide water for drivers on a day when the temperatures cracked 100 degrees.

Daly, who started outside the front row, led a few laps early before Duty took command. Duty held the lead until the 33rd lap but chased Whisler from the second spot the rest of the way.

Duty's second-place finish was enough to move him into the series points lead after four series events. Jeremy Shank of Salem, Ore., entered the event with the points lead, but he broke a radius rod in his heat race and had to transfer to the feature through a consolation race. He was caught up in a lap-two wreck with Casey Vitale in the feature, then also tangled with Joey Tanner on the 29th lap and become one of the race's 13 non-finishers.

Notes: Whisler was fresh off a victory at Cottage Grove (Ore.) Speedway last weekend. ... Most cars ran the low groove after the first dozen laps or so. ... Mike Miller dropped out with suspension problems. ... Mechanical issues force Rob Campos pitside. ... California youngster Nick Bartels broke a rear end with five laps remaining and ended up 10th. ... Modified ace Jon DeBenedetti of Rogue River, Ore., piloted Rob Mayea's backup car and made the feature. He broke a rod in the engine early in the main event. ... Among drivers failing to make the feature were Rick Wyatt of Salem, Ore., and Brett McCutcheon of Sweet Home, Ore., winner of the previous series event at Willamette Speedway in Lebanon, Ore. McCutcheon was caught up in a heat race wreck and wrecked in the consolation race while holding a transfer spot.