Stadel returns to Colorado for I-76 victory

By Michael Condit and Kim Condit 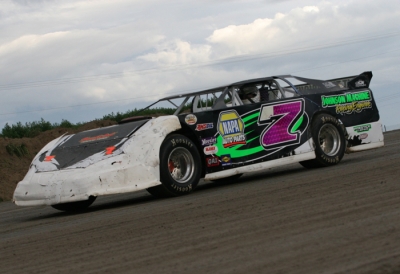 Mike Stadel tunes up at I-76 Speedway. (Ron Olds)

FORT MORGAN, Colo. (June 20) — Getting his victory in Colorado in nearly two years, Mike Stadel of Rapid City, S.D., won from the pole position in a co-sanctioned race at I-76 Speedway. Stadel earned $1,200 in the event co-sanctioned by two Colorado-based tours, the Colorado Late Model Association and Western Dirt Racing Association. | Slideshow

Stadel was runner-up in CLMA points in 2007 when he won three events, including a June event in Fort Morgan.

Scott Cimfl of Arvada, Colo., winner of the season opener at I-76, finished a close second followed by Scott Lewis of Brighton, Colo., Craig Baukema of Elizabeth, Colo., and 11th-starting Dylan Schmer of Lingle, Wyo.

The race was slowed by three cautions in quick succession on laps eight and nine. Curt Daniels spun in turn three on the eighth lap, and debris from Bill Smith's car on the ninth lap brought out a second yellow. On the ensuing restart, Kerry Grandstaff spun out.

Notes: Stadel's Barry Wright Race Car has a Johnson Machine Engine and sponsorship from NAPA Auto Parts. ... Rain hit the track after hot laps and a rainbow appeared. The track forged ahead, getting the track packed again and starting hot laps again after the weather delay. ... Kimberly Horn brought out the only caution in the first heat when she lost her car's left-front tire. ... Steve Lewis had motor problems in hot laps and scratched from the feature. ... Dean Moore broke his car's drivetrain at the outset of the second heat and coasted to the infield, losing the pole position. He went to his backup car for the feature, starting on the tail and rallying to finish eighth. ... Oil pressure problems kept Jason Davis out of action in the main event. ... The CLMA and WDRA competitors take a break before reuniting Aug. 14-15 for two events at Sweetwater Speedway in Rock Springs, Wyo.