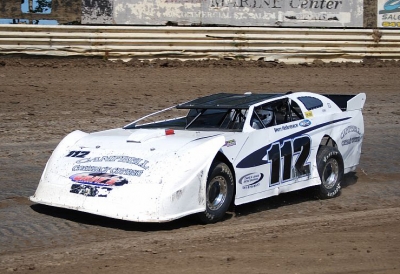 LEBANON, Ore. (May 24) — Brett McCutcheon of Sweet Home, Ore., led every lap from his pole position Sunday at Willamette Speedway for a victory in the third DIRTCar I-5 Northwest Late Model Tour event of the season. McCutcheon earned $1,500 as the series wrapped up the tripleheader weekend. | Slideshow

Series points leader Jeremy Shank of Salem, Ore., improved one position to finish second on a racing surface where passing was at a premium. Fifth-starting Russ Sell of Brownsville, Ore., was third followed by outside front-row starter Greg Walters of Banks, Ore., and John Duty of Portland, Ore., in a feature slowed by three cautions.

Notes: McCutcheon's Rocket Chassis is sponsored by Campbell Cutting. ... McCutcheon also won 2009's regular-season opener at Willamette. ... Reigning I-5 Tour champion Rob Mayea of Bend, Ore., completed a tough season-opening weekend. Unloading his GRT Race Car after running a Victory Circle Chassis the previous two nights, he was an early dropout in the feature and is in a deep hole in the points chase after failing to make Friday's Cottage Grove (Ore.) Speedway feature and finishing ninth Saturday at Willamette. ... The track picked up rubber during qualifying and passing was difficult throughout the night. ... Fast qualifier Cody Sell of Brownsville, Ore., was disqualified for the night after laying his hands on another competitor following a heat race. ... Sell and Mark Carrell of Redmond, Ore., lost their starting spots in their heat when they were penalized for jumping the initial start; Carrell loaded up after the heat. ... Tim Archer and Randy Neal were involved in a heat-race accident that damaged both cars, and they loaded up as well. ... Justin Simpson of Eugene, Ore., using a powerplant purchased during the weekend from the John Duty team, fought fuel pressure problems. ... After having oiling problems with his powerplant at Cottage Grove, Bob Boyd piloted Mike DeSilva's car Sunday at Willamette. ... Among other drivers failing to make the feature: Darren Coffell, Ken Michelli and Randy Boyd. ... Jerry Schram of Vancouver, Wash., made the feature lineup with a Crate Late Model. ... Billy Workman Jr. earned hard charger honors with his 19th-to-sixth run. ... The series takes a break before returning to action around the Fourth of July. The July 3-5 events take the Oregon-based series from Southern Oregon Speedway in Medford to Willamette and finally to Cottage Grove. All the races pay $1,500 to the winner.