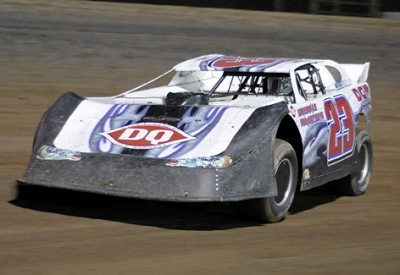 Five-time series champion Lonnie Parker Jr. of El Mirage, Ariz., was second in both events while Tucson's Jeremy Thornton had a pair of third-place finishes on the weekend for the Dairy Queen-sponsored series.

In Saturday's feature, Williams started on the pole and led nine laps before Parker took over. Parker maintained his edge through a series of cautions while Williams had his hands full with Thornton in a battle for second. At the white flag, Parker approached a pack of slower cars and Williams went to the high side while Parker elected for the low groove. Williams used his high-side momentum to swing into the lead exiting turn four, beating Parker by a car length at the checkered flag. Parker, Thornton, Anthony Madrid of Phoenix, Ariz., and Keith Noyes of Tucson rounded out the top five.

In Sunday's feature, Williams started on the pole and kept Thornton in check through the first two-thirds of the race. A lap-21 caution for third-running Noyes moved the sixth-starting Parker up to third for the restart, and he took second from Thornton. But Parker couldn't catch Williams, setting for second ahead of Thornton, Joey Moriarty of Phoenix and Madrid.