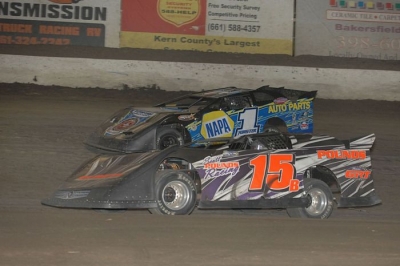 Forster led the first 22 laps, but Pounds went to the low groove in turn one and took control for a lead he'd never give up in a 30-lap feature slowed by eight cautions.

Sixth-starting Steve Drake of San Luis Obispo, Calif., was third while Mike Kirby of Torrance, Calif., and fast qualifier Robert Sanders of Bakersfield rounded out the top five. Polesitter Alex Stanford of Chowchilla, Calif., faded to finish 10th in the event that's part of a two-track collaboration between Bakersfield and Santa Maria Speedway.

Notes: Pounds drove a GRT Race Car sponsored by Scott Pounds Racing. ... Donnie McGowan scratched from qualifying and heat races but was able to make the call for the feature. ... The event paid $500 to start. ... The next West Coast Shootout event is scheduled for June 27 at Santa Maria.