Parker fights off Whitwell for triumph in Tucson 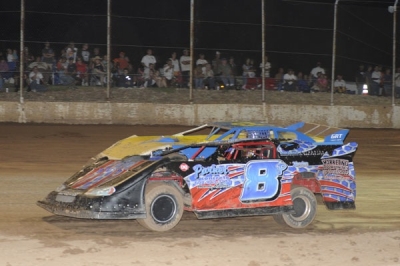 Lonnie Parker Jr. (8) holds on to the lead. (dennisbrownfield.com)

Parker went past Jaime Throckmorton and Brad Williams to grab the lead on the fourth lap, and he was in control through the middle stages of the 25-lapper as the tail-starting Whitwell rallied toward the front. Whitwell moved into the top five, then disposed of Joey Moriarty and Anthony Madrid before taking second from Williams on the 18th lap.

Whitwell closed in on Parker a few laps later and made a move exiting turn two. The tight battle entered turn three with Parker on the inside and Whitwell on the outside, and Whitwell ended up getting into the wall to bring out a caution.

The third-starting Parker closed out the race in the four-lap shootout to the checkered flag while the ninth-starting Madrid, of Phoenix, Ariz., finished second. Moriarty, also of Phoenix, was third while front-row starter Tommy Hussak III of Picacho, Ariz., and 16th-starting Mike Brigner rounded out the top five. Williams dropped out in the closing laps with a flat tire while the polesitting Throckmorton ended up seventh.

Notes: Parker's GRT Race Car is sponsored by Parker Concrete. ... Pat Smiley, the wife of retired Tucson driver Marion Smiley, was the event's grand marshal in honor of the Mother's Day weekend. Marion Smiley piloted the pace car. ... With series officials enforcing rules on lineup procedures, drivers' meeting attendance and wheel-packing, R.C. Whitwell and Tommy Hussak III both started on the tail. ... Adam Crippen departed on the fourth lap to draw the race's first caution. ... Another caution appeared for Mike Clark on the lap-four restart. ... Marty Belcher Jr. parked his smoking car near the halfway point, drawing a caution when he stopped in turn four. ... Next up for the Dairy Queen-sponsored SWDRA tour is May 23-24 events at Canyon Raceway Park in Peoria, Ariz. Each race pays $1,000 to the winner.