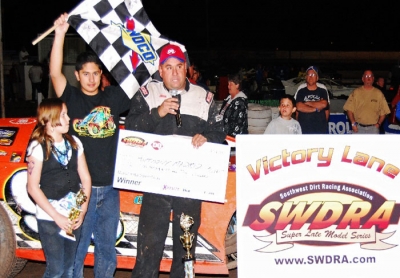 The 10th-starting Madrid, a former Manzanita modified champion who also won an SWDRA event in a Jeff Manka-owned Late Model last season, earned $1,000 as the Arizona Late Model tour bid goodbye to the legendary Southwest track that will be shuttered next month.

Brad Williams of Tucson, Ariz., finished second in the caution-plagued event ahead of Casa Grande, Ariz., drivers Mike Tahtinen, the race's polesitter, and Art Lacy. Modified ace R.C. Whitwell of Tucson rounded out the top five. Terry Belcher Jr. of Phoenix started eighth and worked his way into the lead after eight laps, but he pulled off the track on the 14th, handing the lead to Madrid.

Four more SWDRA events had been scheduled at the 58-year-old track, which has hosted a dozen series events, but those races were scrapped with the sale and closing of the track where open-wheeled aces including A.J. Foyt, Gary Bettenhausen and Mario Andretti have taken checkered flags.

Notes: Madrid's previous SWDRA victory came June 28, 2008, at Manzanita. ... Racing got off to a late start as the track surface took extra packing to work out moisture. ... Car owner and driver Mike Tahtinen, who fields cars for Mike Brigner and Terry Belcher Jr., didn't plan on racing until hearing of Manzy's imminent April 11 closure. He prepared his own car for the event and led the first seven laps after starting on the pole. ... Five-time SWDRA champion Lonnie Parker Jr. pitted to change a tire on the fifth lap. He got back up to fifth but was part of a turn-one scramble on a lap-13 restart. Several restarts were required on the 13th lap, contributing to the decision by officials to shorten the race to 20 laps. ... Brad Whitfield and Randy Carder spun together on the 15th lap and parked for the night. ... Only seven of 18 starters were running at the finish. ... The next SWDRA event is scheduled for April 4 at USA Raceway in Tucson.