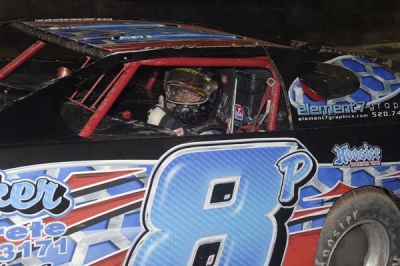 Modified standout Jeremy Thornton, driving the No. 48 usually driven by Lonnie Parker Sr., started outside the front row and led early. But Thornton was overtaking the slower car of Bob Cramb and crashed into the wall between turns three and four. With polesitter Terry Belcher Jr. pulling to the pits during the caution period, Parker got the lead and began to pull away from the field along with Williams and Nick Bartels, the grandson of Bill Bartels. Nick Bartels went to the pits on the 12th lap and ended up 13th.

The most series accident happened early when Tommy Hussak III clipped the frontstretch wall, got up on the berm and flipped just past the grandstand. He wasn't injured.

Notes: The winning GRT Race Car is sponsored by Parker Concrete. ... The event was the first at Tucson under the promotership of Benji Lyons, the former Central Arizona Raceway promoter. ... Several drivers were making rare series starts or driving different cars. Fifth-place finisher Ted Robinson moved up after running Crate Late Models last year. ... Randy Carder changed his car number from 9 to 20. ... Bob Cramb was among Crate Late Model drivers running. ... Next up for the SWDRA is a March 14 event at Manzanita Speedway in Phoenix.