Davenport gets $3,000 at old stomping grounds 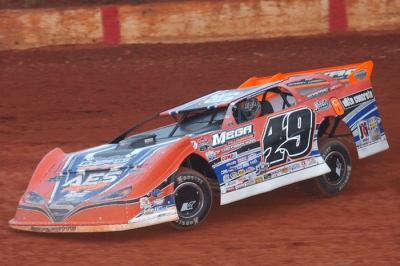 Jonathan Davenport came to his old stomping grounds for a victory. (Brian McLeod)

BRASSTOWN, N.C. (May 31) — Returning to a track where he started his full-sized stock car racing career in a mini-stock at age 10, Jonathan Davenport of Blairsville, Ga., scored a $3,000 victory in the 40-lap Circuit World Memorial Day Late Model Championship event at Tri-County Racetrack.

Wheeling car builder Barry Wright's house car in the track's first major event of the season held under the promotion of Lucas Oil Late Model Series driver Ray Cook, Davenport started from the outside of the front row next to polesitter Shawn Chastain. He took the early lead and held the top spot the entire distance, claiming the prize at the end of a busy holiday racing weekend which also took him to tracks in Missouri and Mississippi.

"It's nice to come home and see a lot of people we know, and also to win a race in front of our local fans," Davenport said. "Ray and I both raced here early in our careers, so we wanted to come and support his show. We've both been able to grow in the sport after getting started at this racetrack, so that's pretty neat to win a race at a track he's now promoting."

Davenport, who led at two different stages by a full straightaway or more, was never seriously challenged and maintained a solid lead over Chastain until the Murphy, N.C., driver's car pulled up lame and stopped in turn three during the closing stages, producing the night's sixth and final caution flag.

Chastain's exit lifted Tony Knowles of Tyrone, Ga., to the runner-up spot, but he was also unable to issue a serious challenge. Davenport pulled away to an uncontested victory. Danny Ledford, a four-time winner this year at Tri-County, was third followed by Clint Smith and Jacob Grizzle.